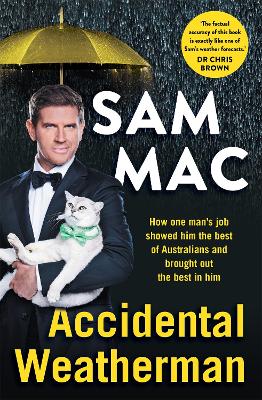 Accidental Weatherman is the story of what happens when a hilarious Adelaide boy who knows nothing about meteorology scores the coveted weatherman gig on the highest rating breakfast TV show in Australia.As the Sunrise weatherman, Sam Mac has bungee jumped, swum with sharks, got his cat on the cover of Pussweek magazine, taken his mum to the Logies when he was nominated for gold, stripped naked for The Real Full Monty and even recorded a song with The Wiggles. But, ultimately, his job is about people - from primary schoolers to pensioners, Sam's gift is how he connects with them all. He uses heart and humour in his role on Sunrise to introduce viewers to the true characters of Australia. He prides himself on bringing awareness to causes such as mental health and animal rescue, and on championing underdogs who might need a hand up or a shout out. His genuine nature and open-book approach to social media has won him hundreds of thousands of fans along the way - although even he would admit that many of them only like him for his cat Coco (who is rapidly catching up to him in Instagram followers).After presenting more than 25 000 minutes of live TV in over 800 different Australian towns, Sam really has seen the absolute best of Australia, and it's brought out the best in him.

» Have you read this book? We'd like to know what you think about it - write a review about Accidental Weatherman book by Sam Mac and you'll earn 50c in Boomerang Bucks loyalty dollars (you must be a Boomerang Books Account Holder - it's free to sign up and there are great benefits!)