The Adventures of Huckleberry Finn

Description - The Adventures of Huckleberry Finn by Mark Twain

'It's lovely to live on a raft. We had the sky up there, all speckled with stars, and we used to lay on our backs and look up at them'

Huck Finn spits, swears, smokes a pipe and never goes to school. With his too-big clothes and battered straw hat, Huck is in need of 'civilising', and the Widow Douglas is determined to take him in hand. And wouldn't you know, Huck's no-good Pap is also after him and he locks Huck up in his cabin in the woods. But Huck won't stand too much of this, and after a daring escape, he takes off down the Mississppi on a raft with an runaway slave called Jim. But plenty of dangers wait for them along the river - will they survive and win their freedom?

BACKSTORY- Discover how to write secret messages in code, and learn about the extraordinary Mark Twain.

Other Editions - The Adventures of Huckleberry Finn by Mark Twain 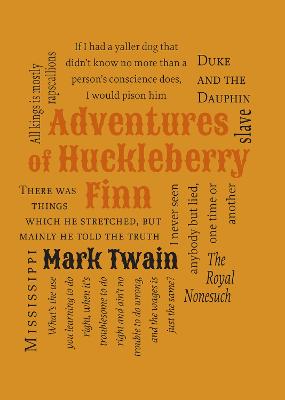 Book Reviews - The Adventures of Huckleberry Finn by Mark Twain

» Have you read this book? We'd like to know what you think about it - write a review about Adventures of Huckleberry Finn book by Mark Twain and you'll earn 50c in Boomerang Bucks loyalty dollars (you must be a Boomerang Books Account Holder - it's free to sign up and there are great benefits!)

Mark Twain's real name was Sam Clemens, and he was born in 1835 in a small town on the Mississippi, one of seven children. He smoked cigars at the age of eight, and aged nine he stowed away on a steamboat. He left school at 11 and worked at a grocery store, a bookstore, a blacksmith's and a newspaper, where he was allowed to write his own stories (not all of them true). He then worked on a steamboat, where he got the name 'Mark Twain' (from the call given by the boat's pilot when their boat is in safe waters). Eventually he turned to journalism again, travelled round the world, and began writing books which became very popular. The Adventures of Tom Sawyer and The Adventures of Huckleberry Finn are his most famous novels. He poured the money he earned from writing into new business ventures and crazy inventions, such as a clamp to stop babies throwing off their bed covers, a new boardgame, and a hand grenade full of extinguishing liquid to throw on a fire. With his shock of white hair and trademark white suit Mark Twain became the most famous American writer in the world. He died in 1910.