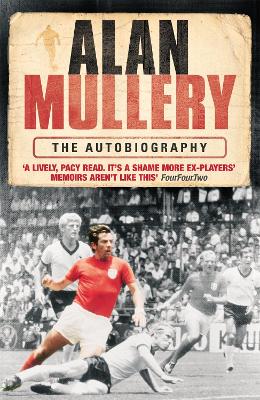 Fearless. Competitive. Controversial. Three words that sum up the football career of Alan Mullery. His passion for football is matched by a stream of anecdotes about the players that have filled his professional life, including Bobby Moore, Pele, Johnny Haynes, Jimmy Greaves and George Best. Here, for the first time, Mullery lets the reader into the secrets he has previously kept hidden: the shame of being sent off for England; the true story behind England's 1970 World Cup quarter-final defeat; how he sold one thousand Cup final tickets on the black market; the bitterness behind the cheers of Spurs' 1972 UEFA Cup victory and the naked blonde in the hotel. In addition, he relates from the heart his darkest moments, brought on by stiffling financial pressure, and how he had to look deep within himself to come through the other end.

» Have you read this book? We'd like to know what you think about it - write a review about Alan Mullery Autobiography book by Alan Mullery and you'll earn 50c in Boomerang Bucks loyalty dollars (you must be a Boomerang Books Account Holder - it's free to sign up and there are great benefits!)

Alan Mullery MBE made his Fulham debut at 17. He signed for Spurs in 1964 and captained them to FA Cup, League Cup and UEFA Cup successes. He won 35 England caps and played in the 1970 World Cup finals in Mexico, scoring in the classic quarter-final match against West Germany. A final spell at Fulham featured a cup run to Wembley, alongside Bobby Moore. 'Mullers' then became a manager, notably with Brighton where he steered them to two promotions in five years, plus Charlton, Crystal Palace and QPR before joining Sky Sports as a successful TV pundit.

A Preview for this title is currently not available.
More Books By Alan Mullery
View All