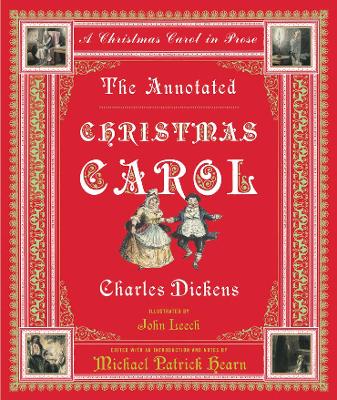 A Christmas Carol in Prose

What would Christmas be without A Christmas Carol? Charles Dickens's famous ghost story is as much a part of the season as plum pudding and mistletoe, and Michael Patrick Hearn, the celebrated annotator of The Wizard of Oz and The Adventures of Huckleberry Finn, has now prepared a sumptuous new edition of the Dickens classic. This latest contribution to the Norton annotated series delves into the engrossing history of the book's publication, when it first captivated Victorian England. This is the first edition to combine the original text of 1843 with Dickens's Public Reading text, which had its world premiere in America in 1867 and has not been reprinted in nearly a century. Also included are rare photographs as well as the original Leech wood engravings and hand-colored etchings. These are supplemented by other contemporary illustrations by George Cruikshank, Gustave Dor? John Tenniel, and "Phiz." The Annotated Christmas Carol will be a literary feast for the whole family for generations.

» Have you read this book? We'd like to know what you think about it - write a review about Annotated Christmas Carol book by Charles Dickens and you'll earn 50c in Boomerang Bucks loyalty dollars (you must be a Boomerang Books Account Holder - it's free to sign up and there are great benefits!)

Charles Dickens (1812-1870) is one of the most acclaimed and popular writers of all time. His many works include the classics The Old Curiosity Shop, Oliver Twist, Nicholas Nickleby, Barnaby Rudge, A Christmas Carol, A Tale of Two Cities, David Copperfield, Great Expectations, Bleak House, Hard Times, Our Mutual Friend, The Pickwick Papers and many more. John Leech (1817-1864) was a well regarded English caricaturist, whose works often appeared in Punch and the London News. An accomplished lithographer and engraver, Leech's illustrations illuminated the original edition of Charles Dickens's A Christmas Carol. Michael Patrick Hearn has written for the New York Times, The Nation, and many other publications. His books include From the Silver Age to Stalin: Russian Children's Book Illustration and The Porcelain Cat; he has edited The Victorian Fairy Tale Book, The Annotated Wizard of Oz, The Annotated Christmas Carol, and The Annotated Huckleberry Finn. Hearn lives in New York City.