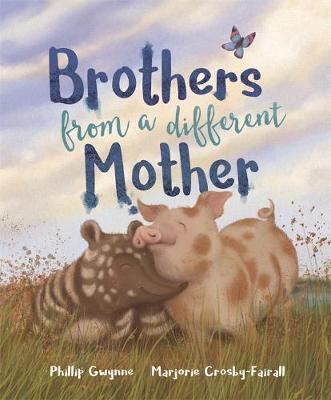 Brothers from a Different Mother

Description - Brothers from a Different Mother by Phillip Gwynne

From a master storyteller comes this heartfelt tale of friendship . . . and seeing past our differences.

Tapir lives in the jungle.

Pig lives in the village.

But when they meet at the waterhole, they discover they are the same in so many ways.

They might even be brothers from a different mother!

Book Reviews - Brothers from a Different Mother by Phillip Gwynne

» Have you read this book? We'd like to know what you think about it - write a review about Brothers from a Different Mother book by Phillip Gwynne and you'll earn 50c in Boomerang Bucks loyalty dollars (you must be a Boomerang Books Account Holder - it's free to sign up and there are great benefits!)

Phillip Gwynne (Author) Phillip Gwynne's first novel Deadly Unna? , the literary hit of 1998, has now sold over 180,000 copies. It was made into the feature film Australian Rules for which Phillip won an AFI award. The sequel, Nukkin Ya, was published to great acclaim in 2000. For the Aussie Bites series, He wrote The Worst Team Ever, Born to Bake, and A Chook Called Harry. Independent novels include Jetty Rats and Swerve (which was shortlisted for many awards amongst them the 2010 Prime Minister's Award and the Golden Inky), and he has written an adult detective thriller The Build Up, The Debt series. Phillip is also the author of Michael in the Stuff Happens series. Marjorie Crosby-Fairall (Illustrator) Marjorie Crosby-Fairall was born in America and currently lives in Sydney, Australia. She has a Bachelor of Fine Arts in Illustration from Northern Illinois University. In 1997 she won the CBCA Eve Pownall Award for Information Books and has since been short-listed for other awards. She currently works as a freelance illustrator for educational publishers, general editorial book publishers and magazines. Marjorie loves to experiment with new techniques for her illustrations, but always seems to return to her beloved and well-used colour pencils.