Greg Heffley is in big trouble. School property has been damaged, and Greg is the prime suspect. But the crazy thing is, he's innocent. Or at least sort of.

The authorities are closing in, but when a surprise blizzard hits, the Heffley family is trapped indoors. Greg knows that when the snow melts he's going to have to face the music, but could any punishment be worse than being stuck inside with your family for the holidays?

READERS LOVE THE DIARY OF A WIMPY KID SERIES

'The Diary of a Wimpy Kid series is the big fish in publishing now.' The Hollywood Reporter

'One of the most successful children's series ever published.' The Washington Post

Other Editions - Cabin Fever: Diary of a Wimpy Kid (BK6) by Jeff Kinney 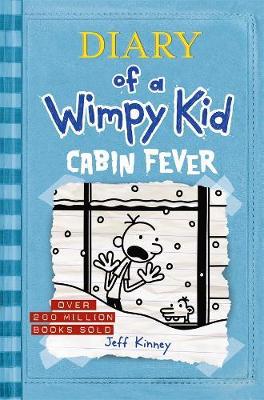 » Have you read this book? We'd like to know what you think about it - write a review about Cabin Fever: Diary of a Wimpy Kid (BK6) book by Jeff Kinney and you'll earn 50c in Boomerang Bucks loyalty dollars (you must be a Boomerang Books Account Holder - it's free to sign up and there are great benefits!)

The Wimpy Kid is back with cabin fever.

This story like all the previous follow Greg around but this time he is heading towards Christmas and we see Greg's methods for presents and earning money, as usual Greg finds himself in trouble. As the title suggest there is Cabin Fever involved when Greg finds himself snowed in for a period of time.

Manny plays more of a main role in this book which is good to see. Like the others this book is nicely illustrated with basic drawing which have made this book so popular and unique. Cabin Fever is one of the better entries in the series.