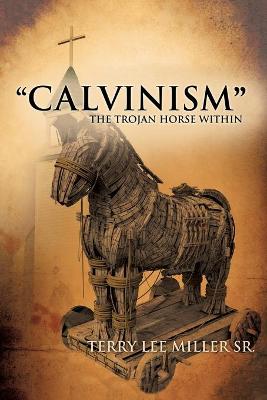 "CALVINISM" The Trojan Horse Within

Description - "CALVINISM" The Trojan Horse Within by Terry Lee Miller

Calvinism is probably one of the deadliest, satanic doctrines ever to surface attacking the New Testament churches, seminaries, and colleges. Once that deadly doctrine takes hold on the theology of a person or a Christian institution that Christian or institution always degenerates into Laodiceaism and spiritual bankruptcy. Calvinists are quick to hide their true doctrinal positions, especially when they apply for positions in non-Calvinist pastoral positions or places of leadership. Calvinism makes God and our Blessed Savior to be evil sadists who reward infinite punishment for finite sins, forcing out of all of humanity a small percentage to bow to salvation, while (the God- head) then forces the remainder of lost people to burn in the Lake of Fire for eternity with no mercy. Is there a real Heaven, and a real Hell/Lake of Fire where the wicked lost are severely punished? Absolutely yes, but only a place of temporary punishment according (in degree) to their temporal works. Such a depraved system of theology is commonly held by Reformed Baptists, Presbyterians, and other Calvinist institutions. The magnificent Moody church and college may not have escaped becoming a Calvinist bastion due to Erwin Lutzer being the pastor for so many years. He was a 5 point Calvinist as documented in this booklet. (It has been rumored the wonderful Bob Jones University has quite a conclave of Calvinists among them). Worst yet is, Calvinism is a subtle attack upon the deity of Christ, by falsely claiming that Jesus offered salvation to all men (when they say) that only certain few were 'chosen' (the frozen chosen) to accept Jesus and be saved. Thus they infer Jesus lied in offering salvation to all men (which would be a lying message) while knowing that only the so called elect could be saved (forced by God to be saved). Calvinists need to be forced out of our fundamental evangelical schools/churches so they can build their own heresy centers. Romans points out "Even as in Adam all die, so also in Christ shall all be made alive. See also our new book, "The Death of Endless Damnation," available also on e-book, which irrefutably proves Universal Christian Redemption, where all will eventually come to Christ and be saved. Remember, 'Truth will stand examination.' Break fellowship with Calvinists!

» Have you read this book? We'd like to know what you think about it - write a review about "CALVINISM" The Trojan Horse Within book by Terry Lee Miller and you'll earn 50c in Boomerang Bucks loyalty dollars (you must be a Boomerang Books Account Holder - it's free to sign up and there are great benefits!)


A Preview for this title is currently not available.
More Books By Terry Lee Miller
View All