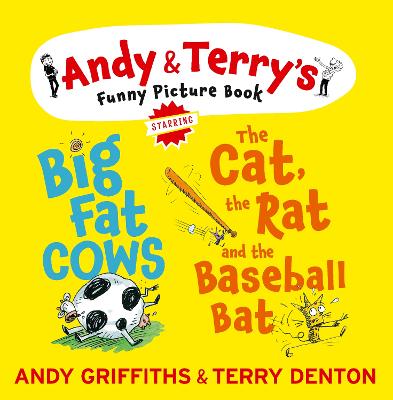 The Cat, The Rat & The Baseball Bat & Big Fat Cows

What happens when a cat meets a rat with a baseball bat?

This hilarious story from Andy Griffiths' popular book The Cat on the Mat is Flat has been formatted especially for beginning readers.
And...
Big cows here.
Fat cows there.
Big fat cows are EVERYWHERE!

The hilarious story from Andy and Terry's popular book The Big Fat Cow That Goes Kapow! is now
available as a board book.

» Have you read this book? We'd like to know what you think about it - write a review about Cat, The Rat & The Baseball Bat & Big Fat Cows book by Andy Griffiths and you'll earn 50c in Boomerang Bucks loyalty dollars (you must be a Boomerang Books Account Holder - it's free to sign up and there are great benefits!)

Andy Griffiths and Terry Denton are a creative partnership that began with Just Tricking in 1997 and now extends to seven Just books and more than a million copies sold, the bestselling The Bad Book, and its equally bad sequel, The Very Bad Book. They are now published all over the world including the US where Andy's BUM books have made the New York Times bestseller lists. In 2011, The 13-Storey Treehouse marked the beginning of a fabulous new series from the duo. The 26-Storey Treehouse was the bestselling Australian children's title in 2012.

A Preview for this title is currently not available.
More Books By Andy Griffiths
View All