Claude, the bestselling beret-clad canine hero, is aiming for the gold medal - winner of the 5-9 fiction Sainsburys Children's Book Award and soon to be a TV star on Disney Junior.When Claude and Sir Bobblysock discover a Very Exciting Sports Competition at their local sports centre, they are very excited. They are even more excited when they are asked to take part. But Claude's doggy paddle isn't quite fast enough, and he's not quite as good at gymnastics as he thought he might be. Then some robbers steal the Gold Cup and Claude chases them - can he run fast enough to catch them?Claude was selected for the Waterstone's Children's Book Prize, the Richard and Judy Book Club and is soon to be a TV star on Disney Junior with 52 episodes airing in 2017. Claude Going for Gold! is the winner of the 5-9 fiction Sainsburys Children's Book Award. Alex T. Smith was the World Book Day Illustrator 2014. Enjoy further Claude adventures: Claude in the City, Claude on Holiday, Claude at the Circus, Claude in the Country, Claude in the Spotlight, Claude on the Slopes, Claude Lights! Camera! Action!, Claude Going for Gold, Claude All at Sea, Claude Doodle BookPraise for Claude: '...illustrated with humour and elegance...' The TimesFollow the author at and

Other Editions - Claude Going for Gold! by Alex T. Smith 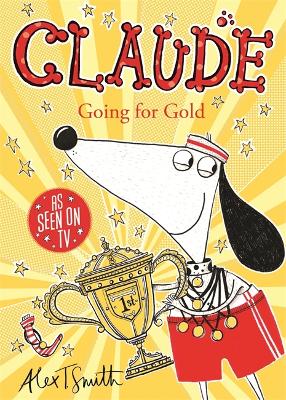 » Have you read this book? We'd like to know what you think about it - write a review about Claude Going for Gold! book by Alex T. Smith and you'll earn 50c in Boomerang Bucks loyalty dollars (you must be a Boomerang Books Account Holder - it's free to sign up and there are great benefits!)