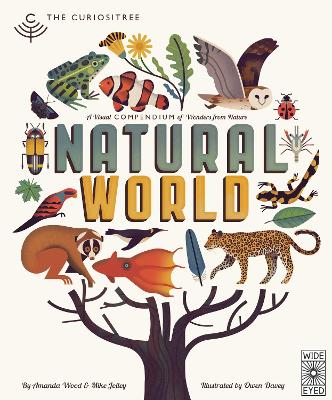 A Visual Compendium of Wonders from Nature - Jacket unfolds into a huge wall poster!

A first introduction to the natural world that looks at the myriad ways in which plants and animals have adapted to give themselves the best chance of survival. Natural World explores and explains why living things look and behave the way they do in a series of visually compelling information charts. » Have you read this book? We'd like to know what you think about it - write a review about Curiositree: Natural World book by AJ Wood and you'll earn 50c in Boomerang Bucks loyalty dollars (you must be a Boomerang Books Account Holder - it's free to sign up and there are great benefits!)

AMANDA WOOD began her career in illustration at the Natural History Museum, and went on to be the founding Editor and Publisher of Templar for more than 30 years. In her time there, she published and nurtured numerous Greenaway winners, and edited and wrote groundbreaking series such as The Ologies, which have sold over 19 million-copies worldwide. Today she writes and runs her own small press from her home in Surrey. MIKE JOLLEY has worked as a Book Designer and Art Director in children's publishing for over 25 years. He is the author of 'Grunter - the story of a pig with attitude' and more recently, 'I'll see you in the morning' - a gentle lullaby illustrated by Mique Moriuchi. Mike also exhibits and sells artwork made from found and collected objects, under the name 'Box 2'. It was during one of his many junk shop visits that the idea of referencing mid-century school information charts as a design approach first took shape for 'Curiositree'. He lives on a cliff overlooking the English Channel. OWEN DAVEY is an award-winning freelance illustrator, living & working in the UK. His work has been published in every continent (except Antarctica), with picture books published in the UK, America, Australia, Germany, France, The Netherlands, Portugal, China & South Korea.

A Preview for this title is currently not available.
More Books By AJ Wood
View All