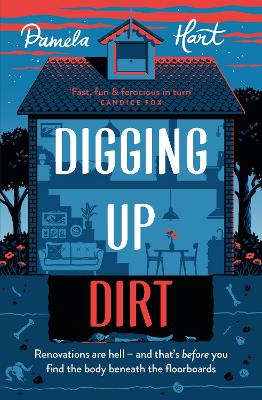 Renovations are hell. And that's before you find the body beneath the floorboards. An intriguing mystery from a stylish new voice in crime fiction, for readers of Kerry Greenwood and Holly Throsby.

When your builder finds bones under the floor of your heritage home, what do you do? For TV researcher Poppy McGowan, the first step is to find out if the bones are human (which means calling in the cops and delaying her renovations) or animal (which doesn't).

Unfortunately, 'help' comes in the form of Dr Julieanne Weaver, archaeologist, political hopeful, and Poppy's old enemy. She declares the bones evidence of a rare breed of fat-tailed sheep, and slaps a heritage order on the site. The resultant archaeological dig introduces Poppy to Tol Lang, the best-looking archaeologist she's ever met - and also Julieanne's boyfriend.

When Julieanne is found murdered in Poppy's house, both she and the increasingly attractive Tol are considered suspects - and so Poppy uses her media contacts and news savvy to investigate other suspects. Did Julieanne have enemies in the right-wing Australian Family Party, for which she was seeking preselection, or in the affiliated Radiant Joy Church? Or at the Museum of New South Wales, among her rivals and ex-boyfriends? And who was her secret lover?

Can Poppy save herself, and Tol ... and finally get her house back?

'Digging Up Dirt is a clever, blackly funny murder mystery of our times' - Petronella McGovern

'Digging UpDirt by Pamela Hart is a great fun read. I couldn't put this smart, sparkling mystery down. I can't wait for book 2 in the Poppy McGowan series' - Anna Campbell, bestselling author of the Dashing Widows series

» Have you read this book? We'd like to know what you think about it - write a review about Digging Up Dirt book by Pamela Hart and you'll earn 50c in Boomerang Bucks loyalty dollars (you must be a Boomerang Books Account Holder - it's free to sign up and there are great benefits!)

4.5?s Digging Up Dirt is the first book in the Poppy McGowan series by Australian author, Pamela Hart. The first thing Poppy McGowan does, when her carpenter tells her he’s found bones under the floor of her house (the most run-down, tiny house in the worst street in Annandale), is to hope this won’t delay the booking with her elusive electricians. Her best friend Annie Southey, Director of Gallery Operations at the Museum of New South Wales, offers to send an archaeologist to check the bones are not human.

As a researcher for the Children’s and Education Department of the ABC, Poppy decides it can form part of their program, so calls in her camera and sound guys to record. She is dismayed to have to welcome Dr Julieanne Weaver (aka Psycho Woman) into her little house (they have a less-than-amicable history) but Julieanne is trailed by a rather gorgeous assistant, Dr Bartholomew (call me Tol) Lang, apparently also her current boyfriend.

The good news is that the bones aren’t human; the bad news is that they might be historically significant, so need to be carbon-dated. Just to make certain that Poppy stops work on her floors, Julieanne applies for a heritage preservation order with the local Council. When Julieanne’s body is discovered, not much later, there in Poppy’s house, the Police immediately tag the preservation order as a motive: Poppy is a suspect, as is Tol, being close as he was.

But there are others with motives: Julieanne’s involvement with a certain nascent right-wing political party and its funding ultra-conservative church did not meet with universal approval; her ex-boyfriend and her boss had potential issues with her behaviour; and there are rumours of a secret lover.

Poppy’s proximity to the case soon sees her pushed into conducting on-camera interviews of parties of interest to the case, uncovering pertinent information, and liaising with the police in an effort to clear her name (and Tol’s). The melodramatic denouement in Poppy’s tiny kitchen is laugh-out-loud funny. This is a hugely entertaining Aussie cosy and more of Poppy McGowan is definitely welcome. This unbiased review is from an uncorrected proof copy provided by NetGalley and HQ Fiction.

It's rare for me to give 5 stars to a "cosy" mystery, but this one really hit the mark for me! It strikes a perfect balance between intrigue and humour, with great characters, a little "will they? won't they?" romance and an action-packed plot leading to a satisfying conclusion. I love the cover by Julia Murray, too! Poppy McGowan works as a researcher for the Australian Broadcasting Corporation (ABC), working on a stimulating "real life" show for kids. When her builder discovers a skeleton beneath the floorboards of the cottage she's renovating, it seems a great opportunity to film a segment on suburban archaeology. Things don't stay fun for long though - firstly, the head archaeologist Dr. Julieanne Weaver, a long-time nemesis of Poppy's, threatens to whack a heritage order on her property, then said archaeologist is found dead in the excavation pit that was once Poppy's living room! Drawing on her skills in researching and natural tenacity, Poppy sets out to discover who, apart from herself, might benefit from Dr. Weaver's untimely death. Her search leads her from the many curious characters who work at the Museum of New South Wales, to the murky and tangled web behind both the ultra-conservative Australian Family Party and the Pentecostal-style Church of Radiant Joy. Her investigations lead to a wonderfully high-camp denouement, featuring heroes, villains and members of local government. Pamela Hart successfully blends a lighthearted mystery with some deeper messages about politics, the news media, attitudes to women and the LGBTI+ community, and the hypocrisies rampant within certain religious lobby groups. As a counterpoint, Poppy's parents and broader family, who are practising Roman Catholics, provide many moments of domestic levity. Digging Up Dirt was a stimulating and highly enjoyable read and I'm delighted to learn that it's the first in a new series by author Pamela Hart. I'd highly recommend the book to any and all lovers of crime and mystery, especially those who seek a less gritty, more up-beat style. My thanks to the author, Pamela Hart, publisher Harlequin Australia, HQ & Mira and NetGalley for the opportunity to read and review this fantastic new title.