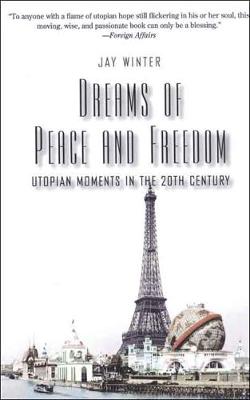 Dreams of Peace and Freedom

Utopian Moments in the Twentieth Century

Description - Dreams of Peace and Freedom by Jay Winter

In the wake of the monstrous projects of Hitler, Stalin, Mao, and others in the twentieth century, the idea of utopia has been discredited. Yet, historian Jay Winter suggests, alongside the ?major utopians? who murdered millions in their attempts to transform the world were disparate groups of people trying in their own separate ways to imagine a radically better world. This original book focuses on some of the twentieth-century's ?minor utopias? whose stories, overshadowed by the horrors of the Holocaust and the Gulag, suggest that the future need not be as catastrophic as the past.

The book is organized around six key moments when utopian ideas and projects flourished in Europe: 1900 (the Paris World's Fair), 1919 (the Paris Peace Conference), 1937 (the Paris exhibition celebrating science and light), 1948 (the Universal Declaration of Human Rights), 1968 (moral indictments and student revolt), and 1992 (the emergence of visions of global citizenship). Winter considers the dreamers and the nature of their dreams as well as their connections to one another and to the history of utopian thought. By restoring minor utopias to their rightful place in the recent past, Winter fills an important gap in the history of social thought and action in the twentieth century.]]>

Book Reviews - Dreams of Peace and Freedom by Jay Winter

» Have you read this book? We'd like to know what you think about it - write a review about Dreams of Peace and Freedom book by Jay Winter and you'll earn 50c in Boomerang Bucks loyalty dollars (you must be a Boomerang Books Account Holder - it's free to sign up and there are great benefits!)

Jay Winter is Charles J. Stille Professor of History, Yale University. He is author or coauthor of more than a dozen books including Remembering War: The Great War between Memory and History in the 20th Century, published by Yale University Press. He lives in Guilford, CT.