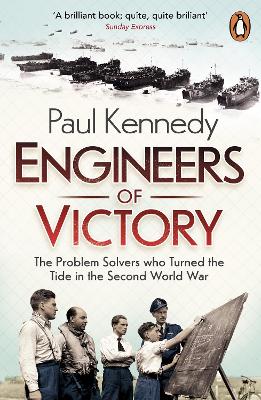 How, when it came down to it, did the Allies win the Second World War? How did they win the Battle of the Atlantic, blunt the Nazi blitzkrieg, work out how to land successfully on an enemy-held shore on D-Day, and 'hop' across the islands of the Pacific to assault the Japanese mainland? In Engineers of Victory Paul Kennedy reveals the role of the problem-solvers and middle-men who made it happen - such as Major-General Perry Hobart, who invented the 'funny tanks' which flattened the D-Day beaches; or Captain 'Johnny' Walker, who worked out how to sink U-boats with a 'creeping barrage'. By brilliantly answering the 'how' question, he brings a fresh perspective to the greatest conflict in human history. 'Consistently original . . . Like an engineer who pries open a pocket watch to reveal its inner mechanics, Kennedy tells how little-known men and woman at lower levels helped win the war . . . An important contribution to our understanding.' Michael Beschloss, The New York Times Book Review 'Compelling, lucid and original . . . Kennedy has produced a fresh perspective on the war' Nigel Jones, Sunday Telegraph 'His refreshing study . . . asks the right questions, disposes of cliches and gives a rich account of neglected topics.' David Edgerton, Financial Times 'Colourfully and convincingly illustrates the ingenuity and persistence of a few people who made all the difference.' Washington Post 'This first-rate book makes us reflect on the past and also leads us to think more deeply about the present and future.' Graham Farmelo, Times Higher Education

Other Editions - Engineers of Victory by Paul Kennedy » Have you read this book? We'd like to know what you think about it - write a review about Engineers of Victory book by Paul Kennedy and you'll earn 50c in Boomerang Bucks loyalty dollars (you must be a Boomerang Books Account Holder - it's free to sign up and there are great benefits!)

Paul Kennedy is among the world's best-selling and most influential historians. Raised in Newcastle-upon-Tyne, he took his doctorate in Oxford and began work shortly afterwards for the first great historian of WW2, Sir Basil Liddell Hart. He now teaches at Yale, and is the author or editor of nineteen books, including The Rise and Fall of the Great Powers (translated into over twenty languages), and Engineers of Victory: The Problem Solvers Who Turned the Tide in the Second World War.