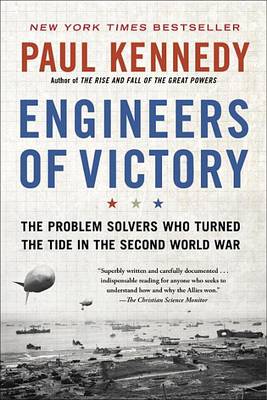 Originally published in hardcover in 2013.

» Have you read this book? We'd like to know what you think about it - write a review about Engineers of Victory book by Professor Paul Kennedy and you'll earn 50c in Boomerang Bucks loyalty dollars (you must be a Boomerang Books Account Holder - it's free to sign up and there are great benefits!)

Paul Kennedy is internationally known for his writings and commentaries on global political, economic, and strategic issues. He earned his B.A. at Newcastle University and his doctorate at the University of Oxford. Since 1983, he has been the Dilworth Professor of History and director of international security studies at Yale University. He is on the editorial board of numerous scholarly journals and writes for The New York Times, Los Angeles Times, The Atlantic, and many foreign-language newspapers and magazines. Kennedy is the author and editor of nineteen books, including The Rise and Fall of the Great Powers, which has been translated into more than twenty languages, followed by Preparing for the Twenty-first Century (1993), and The Parliament of Man (2006).

A Preview for this title is currently not available.
More Books By Professor Paul Kennedy
View All