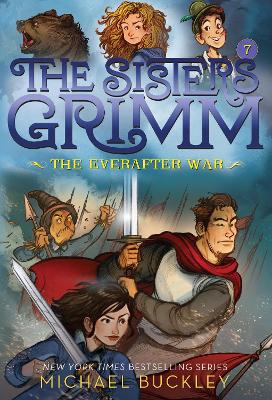 After two years trapped in enchanted sleep, Daphne and Sabrina's parents are finally free. Unfortunately, they've awoken to chaos in Ferryport Landing. Prince Charming and his band of rebels are in hiding, plotting war against the Master and his henchmen. At first, Sabrina is thrilled to have her family back. But after calling the shots for so long, she has forgotten how different-and challenging-life with parents can be. Meanwhile, the Master has dark plans for the Grimms. The family will finally come face-to-face with their tormentor and a betrayal so deep that it will change their world forever!

» Have you read this book? We'd like to know what you think about it - write a review about Everafter War (The Sisters Grimm #7): 10th Anniversary Editio book by Michael Buckley and you'll earn 50c in Boomerang Bucks loyalty dollars (you must be a Boomerang Books Account Holder - it's free to sign up and there are great benefits!)