Praise for Explorer 2: The Lost Islands
STARRED REVIEWS
"A second gathering of new graphic tales, diverse of plot and atmosphere but thematically linked by island settings and every bit as stellar as its predecessor...First rate."
--Kirkus Reviews, starred review

"With this second showcase Kibuishi affirms his editorial savvy for amassing talented creators and providing a vehicle to let them do what they do best: use comics to tell funny, thoughtful, and just plain good stories."
--Publishers Weekly, starred review

"Lost Islands is a great sequel to The Mystery Boxes (Abrams, 2012) that is masterfully told and beautifully drawn. A must-have for any collection."
--School Library Journal, starred review

"This sophomore effort's solid artwork, dialogue, and stories will still be a great introductory title for young or struggling middle-school readers starting to explore the world of graphic novels."
--Booklist

"Variety of style is the real draw of Kibuishi's graphic anthologies, and tweens reluctant to stray from their comic-book favorites will find the gamut of visual presentations eye-opening."
--The Bulletin of The Center for Children's Books

"Another satisfying anthology that will leave readers eager for the next."
--The Horn Book

Other Editions - Explorer 2: The Lost Islands by Kazu Kibuishi 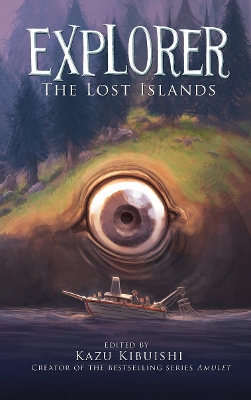 » Have you read this book? We'd like to know what you think about it - write a review about Explorer 2: The Lost Islands book by Kazu Kibuishi and you'll earn 50c in Boomerang Bucks loyalty dollars (you must be a Boomerang Books Account Holder - it's free to sign up and there are great benefits!)

Kazu Kibuishi is the creator of the New York Times bestselling graphic series Amulet and the editor of the Flight and Explorer anthology series. Jason Caffoe is a contributor to Explorer: The Mystery Boxes and to the Flight anthologies. Raina Telgemeier is the New York Times bestselling creator of the middle-school graphic novels Smile and Drama. Dave Roman is the creator of the Astronaut Academy graphic novel series and the coauthor of The Last Airbender: Zuko's Story. Jake Parker illustrated Michael Chabon's picture book The Astonishing Secret of Awesome Man and is the creator of the Missile Mouse graphic novel series. Michel Gagne is the creator of The Saga of Rex and has worked on animated films such as Ratatouille and The Iron Giant. Katie and Steven Shanahan are siblings who have contributed to Flight and created the popular webcomic Silly Kingdom. Chrystin Garland is a storyboard artist and animator who recently graduated from the Savannah College of Art and Design.