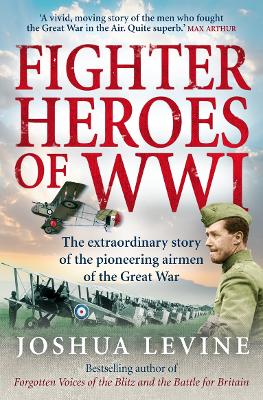 The first heroes of the air.

Rewriting the rules of military engagement and changing the course of modern history as a result, the pioneering airmen of the First World War took incredible risks to perform their vital contribution to the war effort.

Fighter Heroes of WWI is a narrative history that conveys the perils of early flight, the thrills of being airborne, and the horrors of war in the air at a time when pilots carried little defensive armament and no parachutes.

The men who joined the Royal Flying Corps in 1914 were the original heroes of flying, treading into unknown territory, and paving the way for later aerial combat. They became icons for the soldiers in the trenches, and a stark contrast to the thousands on the ground fighting faceless thousands as men fought aircraft to aircraft and man to man - for the first time the air became a battlefield of its own.

The war changed flying forever. In 1914 aircraft were a questionable technology, used for only basic reconnaissance. But by 1918, hastened by the terrible war, aircraft were understood to be the future of modern warfare.

The Wright brothers' achievements of a mere ten years earlier and Bleriot's crossing of the Channel just a few years before the war seemed a distant memory as aircraft became killing machines - the war becoming the ancestor of the fearsome air wars of later years.

The stories reveal the feelings of those who defended the trenches from above and witnessed the war from a completely different perspective -the men who were the first fighter heroes of the air.

» Have you read this book? We'd like to know what you think about it - write a review about Fighter Heroes of WWI book by Joshua Levine and you'll earn 50c in Boomerang Bucks loyalty dollars (you must be a Boomerang Books Account Holder - it's free to sign up and there are great benefits!)