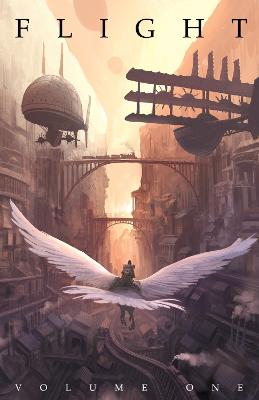 Originally published by Image Comics in 2004, Flight, Volume One launched this graphic novel series with a resounding bang. Since then the Flight series has steadily increased in popularity-and now all of the Flight backlist will be coming to Villard!Flight, Volume One received a great boost when graphic novel hero Scott McCloud praised the quality and artistry of the book in an afterward entitled THE YEAR COMICS TOOK FLIGHT. Little could readers know at the time how prophetic McCloud's words would prove to be."Regardless of where it's shelved, this book belongs in every library." - Library Journal on Flight, Volume OneAuthors included in Flight, Volume One are- Bengal, Bill Mudron, Catia Chien, Chris Appelhans, Clio Chiang, Derek Kirk Kim, Dylan Meconis, Enrico Casarosa, Erika Moen, Hope Larson, Jacob Magraw-Mickelson, Jake Parker, Jen Wang, Joel Carroll, Kazu Kibuishi, Khang Le, Neil Babra, Philip Craven, Rad Sechrist, and Vera Brosgol.

» Have you read this book? We'd like to know what you think about it - write a review about Flight Volume One book by Kazu Kibuishi and you'll earn 50c in Boomerang Bucks loyalty dollars (you must be a Boomerang Books Account Holder - it's free to sign up and there are great benefits!)

Kazu Kibuishi was 24 years old and working full-time in the animation industry when he began developing the idea of doing Flight. He began contacting his friends in the animation, comics, and graphic novel world to see if they would want to join the project. Little did he know that it would draw him into comics full-time. He now works from his home studio in Pasadena, California, creating and promoting Flight and his popular young adult comic Daisy Kutter, which was nominated as an American Library Association Best Book for Young Adults -- the only graphic novel on the list in 2005.