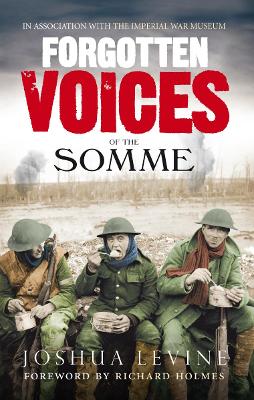 Forgotten Voices of the Somme

Description - Forgotten Voices of the Somme by Joshua Levine

1916. The Somme. With over a million casualties, it was the most brutal battle of the First World War.It is a clash that even now, over 90 years later, remains seared into the national consciousness, conjuring up images of muddy trenches and young lives tragically wasted. Its first day, July 1st 1916 - on which the British suffered 57,470 casualties, including 19,240 dead - is the bloodiest day in the history of the British armed forces to date. On the German side, an officer famously described it as 'the muddy grave of the German field army'. By the end of the battle, the British had learned many lessons in modern warfare while the Germans had suffered irreplaceable losses, ultimately laying the foundations for the Allies' final victory on the Western Front.

Book Reviews - Forgotten Voices of the Somme by Joshua Levine

» Have you read this book? We'd like to know what you think about it - write a review about Forgotten Voices of the Somme book by Joshua Levine and you'll earn 50c in Boomerang Bucks loyalty dollars (you must be a Boomerang Books Account Holder - it's free to sign up and there are great benefits!)

Joshua Levine is an experienced oral historian and author of Forgotten Voices of the Blitz and the Battle for Britain and On a Wing and a Prayer. He has also had plays performed on the London stage and on Radio 4, as well as scripting a television documentary about 18th century London for BBC2.