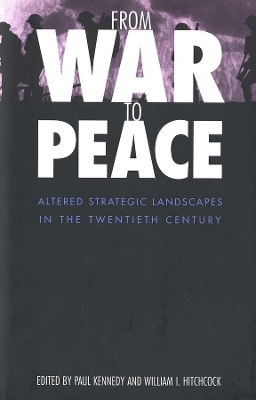 From War to Peace

Description - From War to Peace by Paul Kennedy

In this timely collection, a dozen leading scholars of international affairs consider the twentieth century's recurring failure to construct a stable and peaceful international order in the wake of war. Why has peace been so hard to build? The authors reflect on the difficulties faced by governments as they sought a secure world order after the First World War, the Second World War, and the Cold War.

Major wars unleashed new and unexpected forces, the authors show, and in post-war periods policymakers were faced not only with the reappearance of old power-political issues but also with quite unforeseen challenges. In 1918, a hundred-year-old order based on a balance of power among the states of Europe collapsed, leaving European and American leaders to deal with social, ideological, and ethnic crises. After World War II, hopeful plans for peace were checked by nuclear rivalry, international economic competition, and colonial issues. And unexpected challenges after the Cold War?global economic instability, ethnic conflict, environmental crises?joined with traditional security threats to cast a pall again over international peace efforts. In drawing out historical parallels and comparing how major states have adapted to sharp and sudden changes in the international system during the twentieth century, this book offers essential insights for those who hope to navigate toward peace across today's altered and uncertain strategic landscape.

Contributors to this volume:

Book Reviews - From War to Peace by Paul Kennedy

» Have you read this book? We'd like to know what you think about it - write a review about From War to Peace book by Paul Kennedy and you'll earn 50c in Boomerang Bucks loyalty dollars (you must be a Boomerang Books Account Holder - it's free to sign up and there are great benefits!)

Paul Kennedy is J. Richardson Dilworth Professor of History at Yale University. William I. Hitchcock teaches in the history department at Wellesley College.