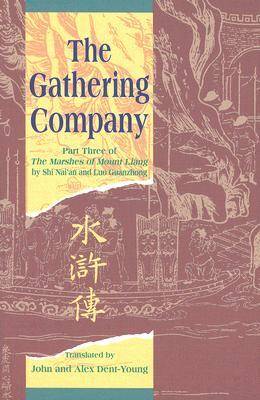 This is the third volume of a series of the new translation of the Chinese classical novel generally known as The Water Margin. In this volume, the company of outlaws on Mount Liang continues to grow - a butcher, a blacksmith, a public executioner, a petty thief... and the usual generals defecting from the government forces. Lu Zhishen, the Flowery Monk, and his companions from Twin Dragon Peak reappear and finally join the company, uniting two important strands of the story. Some episodes are relatively light: a tiger is stolen, an innkeeper's favourite rooster is illicitly eaten, Iron Ox is lowered to the bottom of a well and nearly gets forgotten. But in general the mood is darker. The naked bodies of a lecherous wife is carved up, an innocent child is mercilessly dispatched to gain a reluctant recruit. Chao Gai, the leader on Mount Liang, is killed in battle. Song Jiang replaces him, but for how long can he control his unruly forces? Despite the attraction of the life on the marshes, with its rootless freedom and rough code of honour, we are not to forget how the story was launched, when 108 Demon Princes were released in a black cloud.

This series of new translation by John and Alex Dent-Young is also the first English translation of the 120-chapter version of The Water Margin. The translators have made the English translation as readable to English readers as possible by finding meaningful equivalents for many local terms and proverbial expressions, while aiming to retain some flavour of other times and customs. Readers in the West, even with no specialized knowledge of Chinese, will certainly enjoy the stories and characters presented in the novel.

» Have you read this book? We'd like to know what you think about it - write a review about Gathering Company book by Nai'an Shi and you'll earn 50c in Boomerang Bucks loyalty dollars (you must be a Boomerang Books Account Holder - it's free to sign up and there are great benefits!)

John Dent-Young is a writer and translator now working from his home in England. Alex Dent-Young is pursuing graduate studies at the University of Chicago.

A Preview for this title is currently not available.
More Books By Nai'an Shi
View All