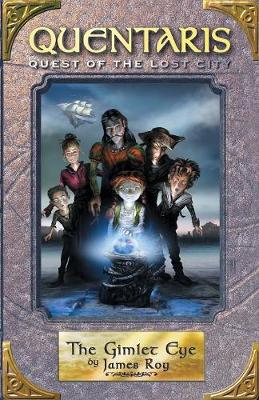 QUENTARIS #2: QUEST OF THE LOST CITY

Much has changed in the sky-city of Quentaris. With the Archon dead, dark forces have come into play. New faces are appearing, familiar ones vanishing, and the horrid Florian has claimed the throne.

Then, as Quentaris slips quietly through a vortex into the watery world of the Yarka, Tab Vidler and her friends suddenly realise they are the city's only hope.

Plots, intrigue, magic, mystery, high adventure and more - everything that you've come to expect from the Quentaris series.

» Have you read this book? We'd like to know what you think about it - write a review about Gimlet Eye, The (Book #3) book by James Roy and you'll earn 50c in Boomerang Bucks loyalty dollars (you must be a Boomerang Books Account Holder - it's free to sign up and there are great benefits!)

The First lot of Quentaris books was a series of shared-world, stand-alone novels for kids, all set in the magical city of Quentaris. They had some recurring characters, but for the most part each book focussed on a new set of main characters. The second series Quentaris: Quest of the Lost City is a little different. The city has been magically uprooted and is now flying through the uncharted rift-maze with the aide of giant sails. And the novels are no longer quite so stand-alone, as they follow the adventures of the same set of characters, most notably — Tab Vidler, the orphan who can enter the minds of animals; her best friends, Philmon and Amelia; Fontagu Wizroth III, actor and scoundrel; Torby, the young boy rescued from the prisons of the rival city, Tolrush; and Captain Verris.

The Gimlet Eye takes things in a new direction, again. The Archon, who has ruled the city since the first set of books, dies. This signals a great change for the city of Quentaris, as the Archon’s spoiled and power-hunger nephew Florian takes charge. He exiles or imprisons many of the people who had previously held key positions in the running of the city, and puts into play is own secret agenda. Under his rule, Quentaris seems set on a course of piracy… unless Tab and her friends can put things right.

James Roy has done exceptionally well at taking characters created by another author and making them his own. This book really hits the mark in terms of characterisation and also delivers an intriguing fast-paced story. My only real reservation is that I found the conclusion a little too speedy and neat. But that certainly didn’t stop me enjoying the book.

The cover, by Les Peterson, is the best so far.

George Ivanoff is a Melbourne based author who has written over 25 books for children and teenagers. Two of his books (Life, Death and Detention and Real Sci-Fi) are on the booklist for the 2008 Victorian Premier's Reading Challenge – this is their fourth year on the list. George used to regularly review books, CDs and DVDs for the now defunct Frontier Magazine. Check out George’s website at: www.georgeivanoff.com.au

The world of Quentaris is in upheaval, more so than usual, and not just from the vortexes. Thanks to the new regime, Tab and the other magic wielders have been relegated to menial tasks, banished, tortured, or simply disappeared. Florian Eftangeny has murdered the Archon and the killing sets in motion a series of events that slowly erode the world of Quentaris. Florian sets about to recover certain talismans which will see him able to control the vortexes that regularly plunge Quentaris into different parts of the universe. Tab, Verris, Torby and others are shanghaied by Florian to travel to the world of Yarka where an exchange has to be made...someone has to die.

Meanwhile, the conceited actor, Fontagu Wizroth the Third, has been ordered to perform for the Emperor’s birthday in a play called The Gimlet Eye. In a scene reminiscent of Shakespeare’s Globe Theatre, Fontagu sets about proving his acting abilities, creating an amusing and highly entertaining sub plot.

Fans of Quentaris will enjoy this latest offering. The characters are well rounded and entertaining, (particularly Fontagu) and the illustrations complement the text delightfully. While there are some darker moments in the book. Roy’s style is generally fast-paced and amusing. Plots, intrigue, magic, mystery, high adventure and more: everything you’ve come to expect from the Quentaris series.

James Roy has written eight other young adult/children’s novels. His website can be found at http://www.jamesroy.com.au.?

In this third instalment of the spin-off of the popular Quentaris shared-world series, a character from the original series is actually killed off, something that doesn’t usually happen in shared universes. As it happens in the prologue, it’s no secret.

The Archon, ruler of Quentaris, is dying. His horrible nephew Florian is persuaded to finish him off rather than wait for his inevitable death. Florian’s “friend” Janus (as in the two-faced god?) reminds him of the prophecy that declares that anyone who kills the previous ruler will rule properly himself. Janus, of course, has his own agenda.

Meanwhile, the adult magicians have been banished to a very nasty part of the city (well, they can’t be exiled elsewhere, short of being thrown overboard, since Quentaris has been travelling from one vortex to another). The younger ones, such as Tab Vidler, former Dung Brigader and recently an apprentice magician, and her friend Amelia, have been spared the dungeons, but left to their own devices. Tab is back to shovelling dung, though on a farm rather than the streets, while Amelia is working at a pub. Torby, the boy rescued in the first novel, The Spell of Undoing, is lying in hospital in a catatonic state. Nobody knows how this happened, except, of course, the reader.

That conceited ac-tor, Fontagu Wizroth the Third, has been ordered to do a command performance of a play called The Gimlet Eye for the new Emperor’s birthday, and he’s thrilled. Tab, Amelia and their friend, the former pirate Verris, can’t persuade Fontagu that there’s something fishy going on…

In my opinion, this one is the best so far in the new series. We learn more about the characters and their feelings. The adventure is fast, but straightforward enough for the young readers for whom this is an introduction to fantasy. At the same time, there’s a murder in the first chapter; there’s no tiptoeing around the issue. What happens to the adult magicians is also scary.

But there’s still plenty of humour, maybe more than there's been since the end of the original series – and in the end, Fontagu is shown in a more positive light than before.

The only thing is, while you can probably get something out of this book without having read the others, you really do need to have read them to understand properly what’s going on. The series is no longer a lot of related but individual titles. There is still, however, a policy of using some of Australia’s top children’s writers to keep the quality up. Recommended for children from mid-primary to early secondary school.

James Roy was born in Trundle, NSW and spent much of his life as a missionary child in Papua New Guinea and Fiji. His books have garnered many awards over the years including various Premier's awards, CBCA, IBBY and Royal Blind Society Talking Book of the Year Awards. He currently lives in the Blue Mountains with his wife Vicki, daughters April and Holly and dogs Otto and Rosie. Also by James Roy: Town, Problem Child, Captain Mack, Billy Mack's World.