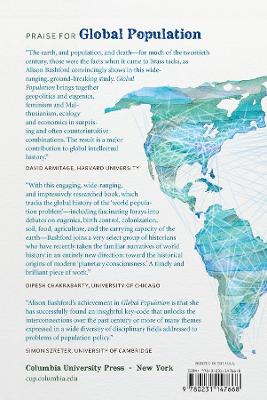 Concern about the size of the world's population did not begin with the "population bomb" in 1968. It arose in the aftermath of World War I and was understood as an issue with far-reaching ecological, agricultural, economic, and geopolitical consequences. The world population problem concerned the fertility of soil as much as the fertility of women, always involving both "earth" and "life."

Global Population traces the idea of a world population problem as it evolved from the 1920s through the 1960s. The growth and distribution of the human population over the planet's surface came deeply to shape the characterization of "civilizations" with different standards of living. It forged the very ideas of development, demographically defined three worlds, and, for some, an aspirational "one world."

Drawing on international conference transcripts and personal and organizational archives, this book reconstructs the twentieth-century population problem in terms of migration, colonial expansion, globalization, and world food plans. Population was a problem in which international relations and intimate relations were one. Global Population ultimately shows how a geopolitical problem about sovereignty over land morphed into a biopolitical solution, entailing sovereignty over one's person.

Other Editions - Global Population: History, Geopolitics, and Life on Earth by Alison Bashford » Have you read this book? We'd like to know what you think about it - write a review about Global Population: History, Geopolitics, and Life on Earth book by Alison Bashford and you'll earn 50c in Boomerang Bucks loyalty dollars (you must be a Boomerang Books Account Holder - it's free to sign up and there are great benefits!)


A Preview for this title is currently not available.
More Books By Alison Bashford
View All

The Cambridge History of Australia: Volume 1, Indigenous and Colonial Australia
$53.15 $55.95