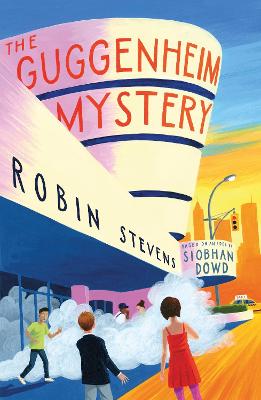 My name is Ted Spark. I am 12 years and 281 days old. I have seven friends.
Three months ago, I solved the mystery of how my cousin Salim disappeared from a pod on the London Eye.
This is the story of my second mystery.

This summer, I went on holiday to New York, to visit Aunt Gloria and Salim. While I was there, a painting was stolen from the Guggenheim Museum, where Aunt Gloria works.
Everyone was very worried and upset. I did not see what the problem was. I do not see the point of paintings, even if they are worth e9.8 million. Perhaps that's because of my very unusual brain, which works on a different operating system to everyone else's.
But then Aunt Gloria was blamed for the theft - and Aunt Gloria is family. And I realised just how important it was to find the painting, and discover who really had taken it.

Other Editions - The Guggenheim Mystery by Robin Stevens » Have you read this book? We'd like to know what you think about it - write a review about Guggenheim Mystery book by Robin Stevens and you'll earn 50c in Boomerang Bucks loyalty dollars (you must be a Boomerang Books Account Holder - it's free to sign up and there are great benefits!)

Robin Stevens (Author) Robin Stevens was born in California and grew up in an Oxford college. She has been making up stories all her life. She spent her teenage years at Cheltenham Ladies' College, went on to study crime fiction at university, and then became a children's book editor. She is now a full-time writer and the creator of the bestselling, award-winning Murder Most Unladylike series. Robin lives in London with her husband and her pet bearded dragon, Watson. Siobhan Dowd (Author) Siobhan Dowd lived in Oxford with her husband, Geoff, before tragically dying from cancer in August 2007, aged 47. She was both an extraordinary writer and an extraordinary person. Siobhan's first novel, A Swift Pure Cry, won the Branford Boase Award and the Eilis Dillon Award and was shortlisted for the Carnegie Medal and Booktrust Teenage Prize. Her second novel, The London Eye Mystery, won the 2007 NASEN & TES Special Educational Needs Children's Book Award. In March 2008, the book was shortlisted for the prestigious Children's Books Ireland Bisto Awards. Siobhan's third novel, Bog Child, was the first book to be posthumously awarded the Carnegie Medal in 2008. The award-winning novel A Monster Calls by Patrick Ness was based on an idea of Siobhan's. Her novella, The Ransom of Dond, was published in 2013, illustrated throughout by Pam Smy.

A Preview for this title is currently not available.
More Books By Robin Stevens
View All

The Case of the Missing Treasure: A Murder Most Unladylike Mini Mystery
Available, ships in 7-10 business days
$5.09 $5.99