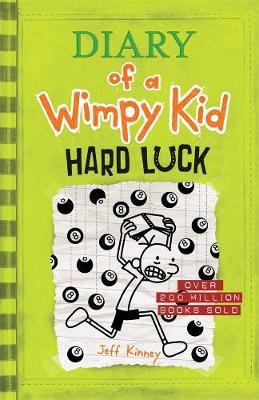 Jeff Kinney's 8th book of this hilarious and highly successful series, and Greg Heffley and his friends now have a whole new set of adventures.

Greg Heffley's on a losing streak. His best friend, Rowley Jefferson, has ditched him, and finding new friends in middle school is proving to be a tough task. To change his fortunes, Greg decides to take a leap of faith and turn his decisions over to chance. Will a roll of the dice turn things around, or is Greg's life destined to be just another hard-luck story?

Readers love the Diary of a Wimpy Kid series.

'One of the most successful children's series ever published.' Washington Post

Other Editions - Hard Luck: Diary of a Wimpy Kid (BK8) by Jeff Kinney » Have you read this book? We'd like to know what you think about it - write a review about Hard Luck: Diary of a Wimpy Kid (BK8) book by Jeff Kinney and you'll earn 50c in Boomerang Bucks loyalty dollars (you must be a Boomerang Books Account Holder - it's free to sign up and there are great benefits!)