Hell On The Way To Heaven

Description - Hell On The Way To Heaven by Chrissie Foster

An Australian mother's love, the power of the Catholic Church and the fight for justice over child sexual abuse.

Chrissie and Anthony Foster were like any other young family, raising their three daughters in suburban Melbourne with what they hoped were the right values. Chrissie could not have known that the stranger-danger she feared actually lurked in the presbytery attached to the girls' Catholic primary school. Father Kevin O'Donnell, a long-term paedophile, lived and worked there. Two of their young daughters became victims of O'Donnell. And once the truth was revealed, the Fosters began a battle to find out how this could have happened. The Church offered silence, lies, denials and threats. Meanwhile, their daughters tried to piece together their fractured lives.

This is the chilling true story that made national and international headlines. Chrissie Foster's heartbreaking account of her family's suffering, and their determination to stand up for themselves against the might of the Catholic Church, is testament to the strength of a mother's love, and the resilience of the human spirit.

Other Editions - Hell On The Way To Heaven by Chrissie Foster 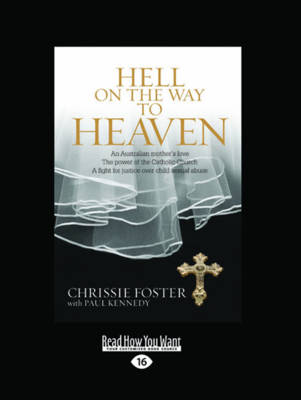 Book Reviews - Hell On The Way To Heaven by Chrissie Foster

» Have you read this book? We'd like to know what you think about it - write a review about Hell On The Way To Heaven book by Chrissie Foster and you'll earn 50c in Boomerang Bucks loyalty dollars (you must be a Boomerang Books Account Holder - it's free to sign up and there are great benefits!)

Chrissie Foster was born in Victoria and grew up in Black Rock, a beachside suburb on Port Phillip Bay. She worked as a public servant for nine years, during which time she travelled extensively around Europe, the US and Mexico. She married in 1980 and by 1985 Anthony and Chrissie had three beautiful daughters, Emma, Katie and Aimee. Paul Kennedy is an ABC television presenter, senior print journalist, and director of an award-winning short film. He is married with two sons and lives in Melbourne.

A Preview for this title is currently not available.
More Books By Chrissie Foster
View All