This landmark collection brings together a range of exciting new comparative work in the burgeoning field of hemispheric studies. Scholars working in the fields of Latin American studies, Asian American studies, American studies, American literature, African Diaspora studies, and comparative literature address the urgent question of how scholars might reframe disciplinary boundaries within the broad area of what is generally called American studies. The essays take as their starting points such questions as: What happens to American literary, political, historical, and cultural studies if we recognize the interdependency of nation-state developments throughout all the Americas?What happens if we recognize the nation as historically evolving and contingent rather than already formed? Finally, what happens if the ""fixed"" borders of a nation are recognized not only as historically produced political constructs but also as component parts of a deeper, more multilayered series of national and indigenous histories?With essays that examine stamps, cartoons, novels, film, art, music, travel documents, and governmental publications, ""Hemispheric American Studies"" seeks to excavate the complex cultural history of texts and discourses across the ever-changing and stratified geopolitical and cultural fields that collectively comprise the American hemisphere. This collection promises to chart new directions in American literary and cultural studies. 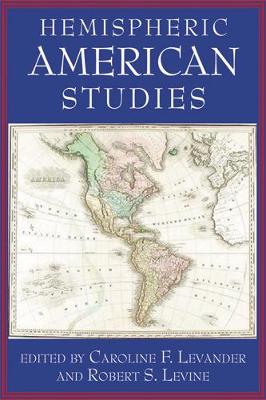 » Have you read this book? We'd like to know what you think about it - write a review about Hemispheric American Studies book by Caroline F. Levander and you'll earn 50c in Boomerang Bucks loyalty dollars (you must be a Boomerang Books Account Holder - it's free to sign up and there are great benefits!)

Caroline F. Levander is a professor of English and director of the Humanities Research Center at Rice University. She is the author of Cradle of Liberty: Race, the Child, and National Belonging from Thomas Jefferson to W.E.B. Du Bois; Voices of the Nation: Women and Public Speech in Nineteenth-Century American Literature and Culture; and the coeditor of The American Child: A Cultural Studies Reader (Rutgers University Press). Robert S. Levine is a professor of English at the University of Maryland. He is the author of Martin Delany, Frederick Douglass, and the Politics of Representative Identity and Conspiracy and Romance: Studies in Brockden Brown, Cooper, Hawthorne, and Melville, and the editor of a number of volumes, including Martin R. Delany: A Documentary Reader.

A Preview for this title is currently not available.
More Books By Caroline F. Levander
View All