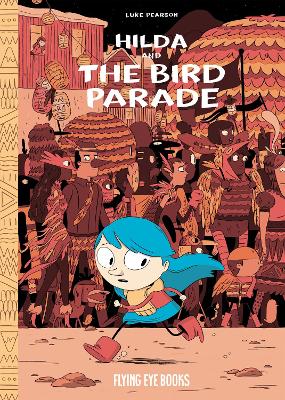 Hilda and the Bird Parade

Description - Hilda and the Bird Parade by Pearson Luke

Getting used to life in the big city is proving difficult for Hilda. The diminutive explorer is still missing the enchanted valleys and magical friends that surrounded her home in the fjords. But tonight is somehow different; tonight is the night of the mysterious Bird Parade.

Finding herself lost on the streets of Trolberg, Hilda befriends a talking raven. Together they encounter all manner of bizarre creatures from outcast Trolls to ferocious Salt Lions and deadly Rat Kings--maybe the city isn't so boring after all.

As the pair try to find their way home, it becomes clear that the amnesiac raven has an important mission to attend to . . . if only he could remember what it was.

Luke Pearson, author of the Hildafolk series and Everything We Miss has fast become one of the leading talents of the United Kingdom comics scene, garnering rave reviews from the prestigious Times and Observer newspapers and winning the Young People's Comic Award at the 2012 British Comic Awards for Hilda and the Midnight Giant.

Book Reviews - Hilda and the Bird Parade by Pearson Luke

» Have you read this book? We'd like to know what you think about it - write a review about Hilda and the Bird Parade book by Pearson Luke and you'll earn 50c in Boomerang Bucks loyalty dollars (you must be a Boomerang Books Account Holder - it's free to sign up and there are great benefits!)

Luke Pearson, author of Hildafolk , Hilda and the Midnight Giant, and Everything We Miss has fast become one of the leading talents of the UK comics scene, garnering rave reviews from the prestigious Times Literary Supplement and The Forbidden Planet International Blog amongst others. He is also a frequent contributor to a number of comic anthologies in the UK as well as self-publishing a number of small-run homemade comics.

A Preview for this title is currently not available.
More Books By Pearson Luke
View All