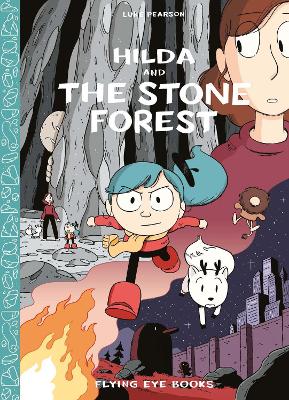 Hilda and the Stone Forest

Description - Hilda and the Stone Forest by Pearson Luke

Hilda may be grounded, but that won t stop her from heading off on another daring adventure! But everything is thrown off course when her mother catches her and is dragged along for the ride. Furious with each other, the bickering pair find themselves lost in the land of the trolls, forced to embark on a dangerous journey to make their way home. And to make matters even more difficult, Hilda has to do so ...as a troll? Buckle your seatbelts for a crazy body-swapping adventure!Luke Pearson is the artist and writer of the Hilda series of graphic novels. He has fast become one of the leading talents of the United Kingdom and United States comics scene, garnering rave reviews from the "New York Times "and the "School Library Journal." He was the winner of the Young People's Comic category at the British Comic Award in 2012, and he has been nominated for the Eisner Award's Best Publication for Kids and Best Writer/Artist in 2013. He has recently written and storyboarded multiple episodes of the cult classic show "Adventure Time." He lives in Bristol, United Kingdom."

Book Reviews - Hilda and the Stone Forest by Pearson Luke

» Have you read this book? We'd like to know what you think about it - write a review about Hilda and the Stone Forest book by Pearson Luke and you'll earn 50c in Boomerang Bucks loyalty dollars (you must be a Boomerang Books Account Holder - it's free to sign up and there are great benefits!)

Luke Pearsons Hildafolk series started as a single issue comic that expanded into three volumes of Scandinavian inspired, critically acclaimed children s books for the artistically daring publisher Nobrow. Mr. Pearson s notoriety with the Hilda series and his other comics have led him to storyboard episodes of Adventure Time, as well as illustration assignments for such prestigious outlets as The New York Times, The New Yorker and the New Republic."