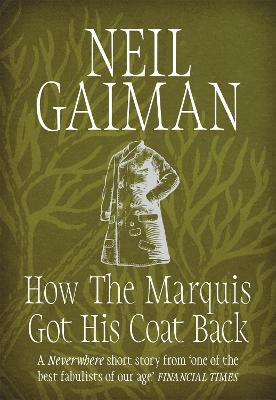 How the Marquis Got His Coat Back

Description - How the Marquis Got His Coat Back by Neil Gaiman

A Neverwhere short story from one of the brightest, most brilliant writers of our generation - the Sunday Times and New York Times bestselling author of the award-winning THE OCEAN AT THE END OF THE LANE. The coat. It was elegant. It was beautiful. It was so close that he could have reached out and touched it.And it was unquestionably his.

Buy How the Marquis Got His Coat Back by Neil Gaiman from Australia's Online Independent Bookstore, Boomerang Books.

» Have you read this book? We'd like to know what you think about it - write a review about How the Marquis Got His Coat Back book by Neil Gaiman and you'll earn 50c in Boomerang Bucks loyalty dollars (you must be a Boomerang Books Account Holder - it's free to sign up and there are great benefits!)