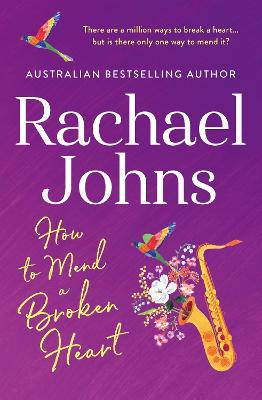 How to Mend a Broken Heart

Description - How to Mend a Broken Heart by Rachael Johns

Felicity Bell has struggled to move on after her marriage broke down. Her ex has found love again, her children have their own lives, and it's beginning to feel like her only comfort comes from her dog and her job as a taxidermist. So when Flick gets an offer to work in New Orleans for a few months, she's drawn to the chance to make a fresh start.

Zoe is ready to start a family with her husband, but when he betrays her, she's left shattered and desperate for a change of scenery. Joining her mother on the other side of the world to drown her sorrows seems the perfect solution.

Although both mother and daughter are wary of risking their hearts to love again, Theo, a jazz bar owner, and Jack, a local ghost hunter, offer fun, friendship and distraction. But all is not as it seems in New Orleans...

A chance meeting with Aurelia, a reclusive artist who surprises them with lessons from her life, prompts Flick and Zoe to reassess what they want too. Can all three women learn from the past in order to embrace their future?

An uplifting novel about three women joyously learning to move on after heartbreak by the bestselling author of The Patterson Girls and Flying The Nest.

Book Reviews - How to Mend a Broken Heart by Rachael Johns

» Have you read this book? We'd like to know what you think about it - write a review about How to Mend a Broken Heart book by Rachael Johns and you'll earn 50c in Boomerang Bucks loyalty dollars (you must be a Boomerang Books Account Holder - it's free to sign up and there are great benefits!)

Book Review: How to Mend a Broken Heart by Rachael Johns - Reviewed by CloggieA (02 May 2021)

5 stars “Heartbreak comes in many different forms, as does betrayal… I know our situations are not exactly the same, but sweetheart, I do know what it feels like to think your life is going one way and suddenly have it switch directions without your consent.”

How To Mend A Broken Heart is the twenty-fifth novel by Australian author, Rachael Johns. it’s been some years since Felicity’s marriage broke down, and she thought she was handling it well, but then it is revealed that her ex was moving on with someone else. The realisation that she’s not over the heartbreak spurs forty-nine-year-old Flick into impulsive action: three months in New Orleans standing in for Harvey Nedderman at Bourbon Street Taxidermy Art.

She’s barely been there a week, still finding her feet after a near-assault on the first night and a flood the next morning, when she finds her twenty-four-year-old blissfully-married daughter Zoe, in tears on her doorstep. Beau, the love of Zoe’s life, has confessed infidelity and walked out, claiming he’s not ready to be tied down to marriage or fatherhood.

So there they both are, in the vibrant French Quarter of America’s liveliest city: one believing all men are bastards after just one thing; the other not yet ready to forsake hibernation to venture back into the world of dating. But right under their noses, neatly placed to break moulds and banish ruts: Theo, a gorgeous piano player who more than proves he’s a good guy; and Jack, a sexy ghost-hunting nerd who rejects first-date sex.

Throw in Aurelia Harranibar, an elderly, eccentric local legend with a talent for gothic and ghoulish art (like skeleton bride paintings) who resides in a dilapidated, probably haunted, mansion, a fortune teller at a voodoo shop; the Casket Brides Fancy Dress Contest; and an unexpected visit from the ex, and you have a delightfully funny, sweetly moving romance.

The characters are appealing, the dialogue snappy and the relationship that Flick has with her ex adds an interesting twist to the story. Johns gives her characters plenty of wise words and insightful observations including the much appreciated “Don’t you know that once you step into an airport all rules about drinking disappear? It’s like a parallel universe with no time zones”

The picture Johns paints of New Orleans would keep travel agents busy with bookings in a COVID-free world: she easily captures the vibe of the city, so that reader can see, hear and smell the sights, sounds and aromas the place has to offer, and her descriptions of the local dishes will have mouths watering. A very enjoyable and entertaining read. This unbiased review is from an uncorrected proof copy provided by NetGalley and HQ Fiction.


A Preview for this title is currently not available.
More Books By Rachael Johns
View All