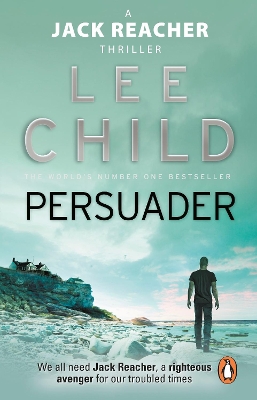 Jack's back - in his most explosive adventure yet.

"Ballsy, dynamic and not for the faint-hearted." (Daily Mail)

Jack Reacher lives for the moment. Without a home. Without commitment. But he has a burning desire to right wrongs - and rewrite his own agonizing past.

When Reacher witnesses a brutal kidnap attempt, he takes the law into his own hands. But a cop dies. Has Reacher lost his sense of right and wrong?

Although the Jack Reacher novels can be read in any order, Persuader is seventh in the series.

» Have you read this book? We'd like to know what you think about it - write a review about Jack Reacher: #7 Persuader book by Lee Child and you'll earn 50c in Boomerang Bucks loyalty dollars (you must be a Boomerang Books Account Holder - it's free to sign up and there are great benefits!)

Book 7 in the Jack Reacher series – Persuader. Sees Reacher mixed up in a kidnapping. In true Lee Childs style, you wonder what is happening, but eventually all is revealed.

This novel is definitely the most violet so far and ofcourse the highest body count. It was lacking some finesse and skill which Lee Childs has demonstrated in his earlier novels. I found this novel a little slow moving and even when it reached the guts of the book, I still felt it was lacking some of the punch of the other books.

Looking forward to the next in the series.