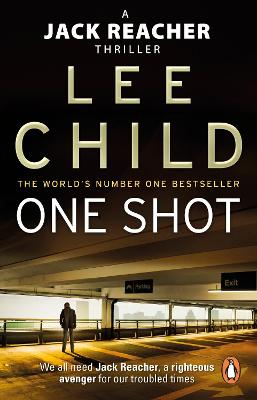 Jack Reacher in a taut, cool, sexy pageturner- One Shot was named on of the 50 best crime novels of the past fifty years by The Times.

A heartland city thrown into terror. But within hours the cops have it solved. A slam-dunk case. Apart from one thing. The accused gunman refuses to talk except for a single phrase-

Get Jack Reacher for me.

Reacher lives off the grid. He's not looking for trouble. But sometimes trouble looks for him. What could connect the noble Reacher to this psychopathic killer?

Although the Jack Reacher can be read in any order, One Shot is the 9th in the series.

» Have you read this book? We'd like to know what you think about it - write a review about Jack Reacher: #9 One Shot book by Lee Child and you'll earn 50c in Boomerang Bucks loyalty dollars (you must be a Boomerang Books Account Holder - it's free to sign up and there are great benefits!)

Lee Child is one of the world's leading thriller writers. His novels consistently achieve the number one slot in hardback and paperback on bestsellers lists on both sides of the Atlantic, and are translated into over forty languages. His debut novel, Killing Floor, was written after he was made redundant from his television job in Manchester, and introduced his much-admired maverick hero, the former military cop Jack Reacher. Born in Coventry, he now lives in America.