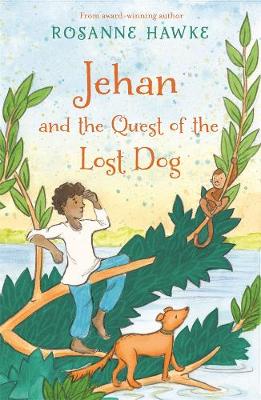 Jehan and the Quest of the Lost Dog

Jehan closed his eyes to pray, then opened them again. It wasn?t a dream. The water was still there - the biggest flood he had seen in his life.For nine-year-old Jehan, life in Pakistan is just as it should be. He attends school, plays cricket with his little brother and fetches water for his family. But when the monsoon unleashes a catastrophic flood, Jehan is swept away from his village and becomes trapped in a tree. Jehan stays alive by rescuing things from the floodwater, but as the days pass with no sign of help, Jehan starts to despair. Will he ever see his family again? Then Jehan rescues a dog and he is no longer alone. But why does the dog keep swimming away? Where is she going? Eventually, Jehan must follow the lost dog into the floodwater. But will the dog?s quest lead them to safety? Or to more danger? Sensitively told, this important story brings home the horrific reality of natural disasters on the lives of children, families and communities around the world, but celebrates need for hope, kindness and resilience that these situations inspire in their aftermath.

Buy Jehan and the Quest of the Lost Dog by Rosanne Hawke from Australia's Online Independent Bookstore, Boomerang Books.

» Have you read this book? We'd like to know what you think about it - write a review about Jehan and the Quest of the Lost Dog book by Rosanne Hawke and you'll earn 50c in Boomerang Bucks loyalty dollars (you must be a Boomerang Books Account Holder - it's free to sign up and there are great benefits!)

Rosanne Hawke is the South Australian author of over twenty-five books. She lived in Pakistan and the United Arab Emirates as an aid worker for ten years. Her books include Kelsey and the Quest of the Porcelain Doll, a CBCA Notable Book, and Taj and the Great Camel Trek, winner of the 2012 Adelaide Festival Awards for Children's Literature and shortlisted for the 2012 NSW Premier's Literary Awards. She is the 2015 recipient of the Nance Donkin Award; an Asialink, Carclew, Varuna and May Gibbs Fellow; and a Bard of Cornwall. She teaches creative writing at Tabor Adelaide and writes in an old Cornish farmhouse with underground rooms near Kapunda. www.rosannehawke.com

Charlie and Lola: I Am Too Absolutely Small For School
Lauren Child
$13.59 $15.99
More Books By Rosanne Hawke
View All