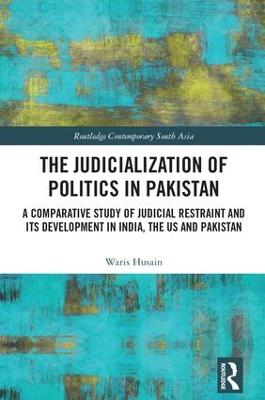 The Judicialization of Politics in Pakistan

A Comparative Study of Judicial Restraint and its Development in India, the US and Pakistan

Description - The Judicialization of Politics in Pakistan by Waris Husain

Since 2007, the Supreme Court of Pakistan has emerged as a dominant force in Pakistani politics through its hyper-active use of judicial review, or the power to overrule Parliament's laws and the Prime Minister's acts. This hyper-activism was on display during the Supreme Court's unilateral disqualification of Prime Minister Yousef Raza Gilani in 2012 under the leadership of Chief Justice Iftikhar Chaudhry. Despite the Supreme Court's practical adoption of restraint subsequent to the retirement of Chief Justice Chaudhry in 2013, the Court has once again disqualified a prime minister, Nawaz Sharif, due to allegations of corruption in 2017.

While many critics have focused on the substance of the Court's decisions in these cases, sufficient focus is not paid to the amorphous case-selection process of the Supreme Court of Pakistan. In order to compare the relatively unregulated process of case-selection in Pakistan to the more structured processes utilized by the Supreme Courts of the United States' and India, this book aims to understand the historical roots of judicial review in each country dating back to the colonial era extending through the foundational period of each nation impacting present-day jurisprudence. As a first in its kind, this study comparatively examines these periods of history in order to contextualize a practical prescription to standardize the case-selection process in the Supreme Court of Pakistan in a way that retains the Court's overall power while limiting its involvement in purely political issues.

This publication offers a critical and comparative view of the Supreme Court of Pakistan's recent involvement in political disputes due to the lack of a discerning case-selection system that has otherwise been adopted by the Supreme Courts of India and the United States' to varying degrees. It will be of interest to academics in the fields of Asian Law, South Asian Politics and Law and Comparative Law.

Book Reviews - The Judicialization of Politics in Pakistan by Waris Husain

» Have you read this book? We'd like to know what you think about it - write a review about Judicialization of Politics in Pakistan book by Waris Husain and you'll earn 50c in Boomerang Bucks loyalty dollars (you must be a Boomerang Books Account Holder - it's free to sign up and there are great benefits!)

Waris Husain is a comparative constitutional law expert with a focus on South Asia, having written on legal developments in Pakistan, India, and Nepal. He teaches international legal advocacy and advises the international moot court program at the Howard University School of Law.