Description - The Killing Room by Peter May

THE NEW CASE When a mass grave containing eighteen mutilated female corpses is discovered in Shanghai, detective Li Yan is sent from Beijing to establish if the bodies are linked to an unsolved murder in the capital. Here, Li will be working with Mei Ling, deputy head of Shanghai's serious crime squad. THE NEW COLLEAGUE Mei Ling is a formidable woman: a fact that is not lost on Li's on-off lover, forensic pathologist Margaret Campbell. But when Campbell, vulnerable and still grieving the loss of her father, learns that the victims were subjected to 'live' autopsies, she knows the case is bigger than her pride. THE KILLING ROOM Li, Campbell and Mei Ling are now entering the arena of a sickening nemesis, and opening a door behind which lies each of their very worst nightmares.

Other Editions - The Killing Room by Peter May 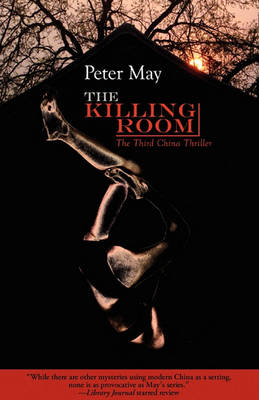 Book Reviews - The Killing Room by Peter May

» Have you read this book? We'd like to know what you think about it - write a review about Killing Room book by Peter May and you'll earn 50c in Boomerang Bucks loyalty dollars (you must be a Boomerang Books Account Holder - it's free to sign up and there are great benefits!)

Peter May was born and raised in Scotland. He was an award-winning journalist at the age of twenty-one and a published novelist at twenty-six. When his first book was adapted as a major drama series for the BCC, he quit journalism and during the high-octane fifteen years that followed, became one of Scotland's most successful television dramatists. He created three prime-time drama series, presided over two of the highest-rated serials in his homeland as script editor and producer, and worked on more than 1,000 episodes of ratings-topping drama before deciding to leave television to return to his first love, writing novels. He has won several literature awards in France, received the USA's Barry Award for The Blackhouse, the first in his internationally bestselling Lewis Trilogy; and in 2014 was awarded the ITV Specsavers Crime Thriller Book Club Best Read of the Year award for Entry Island. Peter now lives in South-West France with his wife, writer Janice Hally.

The Night Gate: the Razor-Sharp Finale to the Enzo Macleod Investigations
$27.71 $32.99