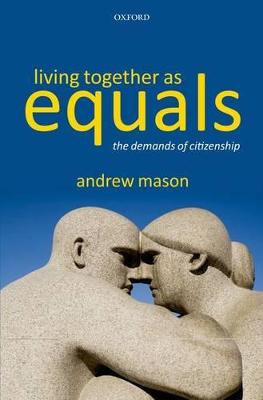 Living Together as Equals

The Demands of Citizenship

Description - Living Together as Equals by Andrew Mason

Traditional understandings of citizenship are facing a number of challenges. Ideas of cosmopolitan and environmental citizenship have emerged in the light of concerns about global inequality and climate change, whilst new models of multicultural citizenship have been developed in response to the dilemmas posed by immigration and the presence of national minorities. At the same time, more particular debates take place about the demands citizenship places upon us in
our everyday lives. Do we have a duty as citizens to take steps to reduce the risk of needing to rely upon state benefits, including health care? Does good citizenship require that we send our
children to the local school even when it performs poorly? Does a parent fail in his duty as a citizen - not just as a father, say - when he is less involved in the raising of his children than their mother? Should citizens refrain from appealing to religious reasons in public debate? Do immigrants have a duty to integrate? Do we have duties of citizenship to minimise the size of our ecological footprints? This book develops a normative theory of citizenship that brings together issues such as
these under a common framework rather than treating them in isolation in the way that often happens. It distinguishes two different ways of thinking about citizenship both of which shed some light on
the demands that is makes upon us: according to the first approach, the demands of citizenship are grounded exclusively in considerations of justice, whereas according to the second, they are grounded in the good that is realised by a political community the members of which treat each other as equals not only in the political process but in civil society and beyond.

Book Reviews - Living Together as Equals by Andrew Mason

» Have you read this book? We'd like to know what you think about it - write a review about Living Together as Equals book by Andrew Mason and you'll earn 50c in Boomerang Bucks loyalty dollars (you must be a Boomerang Books Account Holder - it's free to sign up and there are great benefits!)