'A stunning, immersive novel that will change the conversation about class and about what possessions mean. It's important and funny and sad and beautiful and I absolutely adored it.'
Kathryn Heyman, author of Storm and Grace and Fury

'One of the most big-hearted novels I've ever read. Each person fully formed, each scene and new catastrophe rooted in truth.'
Bri Lee, author of Eggshell Skull

Nic is a forty-five-year-old trivia buff, amateur nail artist and fairy godmother to the neighbourhood's stray cats. She's also the owner of a decade's worth of daily newspapers, enough clothes and shoes to fill Big W three times over and a pen collection which, if laid end-to-end, would probably circle her house twice.

The person she's closest to in the world is her beloved niece Lena, who she meets for lunch every Sunday. One day Nic fails to show up. When Lena travels to her aunt's house to see if Nic's all right, she gets the shock of her life, and sets in train a series of events that will prove cataclysmic for them both.

By the acclaimed author of An Isolated Incident, Love Objects is a clear-eyed, heart-wrenching and deeply compassionate novel about love and family, betrayal and forgiveness, and the things we do to fill our empty spaces. 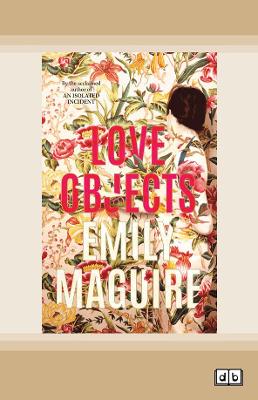 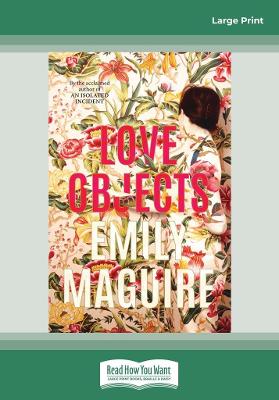 » Have you read this book? We'd like to know what you think about it - write a review about Love Objects book by Emily Maguire and you'll earn 50c in Boomerang Bucks loyalty dollars (you must be a Boomerang Books Account Holder - it's free to sign up and there are great benefits!)

5 stars Love Objects is the sixth novel by Australian author, Emily Maguire. While twenty-year-old uni student, Lena Harris is getting hot and sweaty with her crush, a wealthy country jock, in the borrowed college bedroom of one of his mates, her aunt, Nicole Miller is precariously balanced on her bedroom dresser.

When, some forty-eight hours later, Lena is discovering just how truly despicable a male can be, Nic is drifting in and out of consciousness, not replying to texts about her late arrival for a regular lunch date with her niece.

After the police have broken down the door to Nic’s house in Leichhardt, and Nic is taken away in an ambulance, Lena absorbs the extent of her aunt’s hoarding. Visits to the hospital provide a minor distraction from the avalanche of messages, dick-pics and foul comments that the online video of Lena’s single encounter in that bedroom generates. Against Nic’s clear objection, Lena occupies herself with getting the house into the state that the hospital’s social worker will deem acceptable for Nic’s return home.

In far north Queensland, Lena’s older brother, Will Harris is nursing pain both physical and emotional: sacked from his job, one ill-considered bender triggers his girlfriend’s marching orders (he’s so going to miss being a family, and her two sweet kids), he’s virtually skint, and he’s got a massively painful tooth abscess that he can’t afford to have treated.

The flood of texts and photos of artefacts his sister is unearthing at the Miller Family Home conjures up memories of his childhood, and draws him back to Sydney for the first time since he was released from prison. Both siblings are distracted by their ongoing problems, but the process of sorting through the house does not fail to stir up unresolved issues, even as Nic’s life is being thrown into a skip.

On her return, Nic’s overwhelming reaction is anger at the betrayal her niece and nephew have wrought. How could they callously discard items that mean so much to her?

The story is told from three perspectives (Nic, Lena and Will) without ambiguity, and the somewhat fraught history that these three have with each other is gradually revealed. Her characters easily draw the reader’s empathy; Maguire’s descriptive prose is often wonderfully evocative; and the story ends on an optimistic note: not Hollywood, but rather realistic and believable. Some readers may appreciate a trigger warning for expletives (including the c-word) and explicit sexual description.

With Nic’s chapters, Maguire easily puts the reader inside the mind of the person afflicted by hoarding behaviour, illustrating the rationale and the thought process that leads to collection, storage and the inability to discard. Nic’s connection to the inanimate objects she keeps, endowing them feelings and emotions, recalling their history or imagining a story for them, gives readers insight into this insidious and often-debilitating condition. With humour and heartache, this is a moving and thought-provoking read. This unbiased review is from an uncorrected proof copy provided by Allen & Unwin.

A Preview for this title is currently not available.
More Books By Emily Maguire
View All