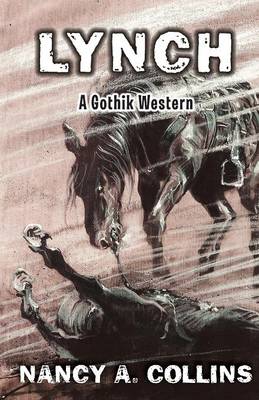 Description - Lynch by Nancy A. Collins

With his killer's cool and his famous pearl-handled pistols, Johnny Pearl has made a name for himself as a gunslinger. But fame proves itself hollow, and his demons finally catch up to him after one gunfight too many. When at last he finds redemption, it's in the smile of Katie Small Dove. Katie helps heal his broken soul, giving him the strength to turn his back on his old life of death and destruction. Soon they are married with a baby on the way, and for the first time in his life, Johnny knows true peace.

But their happiness is suddenly and irrevocably shattered by the arrival of Captain Antioch Drake, a rogue cavalry officer determined to avenge the massacre at Little Big Horn. Within minutes of Drake's arrival, the Pearl homestead is set ablaze, Katie and her unborn child are cruelly slain, and Johnny is left to swing from a cottonwood tree.

Normally, this would be the end of the story-if not for the unexpected appearance of a medicine show wagon driven by a strange old man called Doc Mirablis, who claims to have once been a friend and colleague of a certain Viktor von Frankenstein.

The life and times of outlaw Johnny Pearl are over, but the adventures of the undead gunslinger called Lynch have just begun . . .

» Have you read this book? We'd like to know what you think about it - write a review about Lynch book by Nancy A. Collins and you'll earn 50c in Boomerang Bucks loyalty dollars (you must be a Boomerang Books Account Holder - it's free to sign up and there are great benefits!)

Nancy A. Collins has authored over twenty novels and novellas and numerous short stories, and worked on several comic books, including a two-year run on Swamp Thing. She is a recipient of the HWA's Bram Stoker Award and the British Fantasy Award, and has been nominated for the Eisner, John W. Campbell Memorial, and World Fantasy International Horror Guild Awards. Best known for her groundbreaking vampire series Sonja Blue, which heralded the rise of the popular urban fantasy genre, Collins is the author of the bestselling Sunglasses After Dark, the Southern Gothic collection Knuckles and Tales, and the Vamps series for young adults. Her most recent novel is Left Hand Magic, the second installment in the critically acclaimed Golgotham urban fantasy series. She currently resides in Norfolk, Virginia, with a Boston terrier.