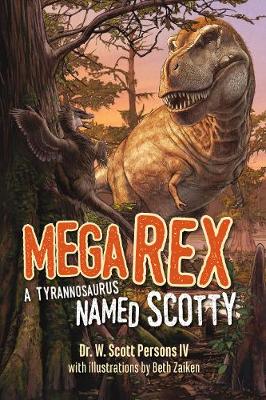 Middle school readers can journey into the prehistoric world of tyrannosaurs and discover what it was like to excavate the world's largest T. rex skeleton.

"Scotty," the largest Tyrannosaurus rex skeleton in the world, was discovered by an elementary school teacher in Saskatchewan's Frenchman River Valley in 1991. It took twenty-three years to excavate the bones and prepare the skeleton for study. Now Scotty has found a new home in the Royal Saskatchewan Museum, where the giant T. rex is the star of a new exhibition. As the largest and longest-lived T. rex ever discovered, Scotty offers fascinating research possibilities, and Dr. Scott Persons is the lead paleontologist on an in-depth scientific report on this unique fossil.

In Mega Rex, Persons distills these findings, plus thrilling details about the discovery of Scotty and the lives of tyrannosaurs, into an exciting illustrated account. The book covers topics ranging from the details of Scotty's discovery and the process of digging up a fossil, to deciphering the meaning behind Scotty's unusual features, including its large facial horns and many wounds. Persons engages dinosaur-obsessed kids with facts based on the latest discoveries that are challenging current ideas about the world's most famous dinosaur species, including what it would feel like to pet a T. rex, how T. rex hunted, whether they were good parents, and if they had forked tongues like snakes.

Featuring profiles of paleontologists, field crew members, museum artists and other members of "team rex," and illustrations by award-winning paleoartist Beth Zaiken and over thirty photos, Mega Rex offers an in-depth look at a new superstar of the fossil world and new insight into tyrannosaurs and the world they inhabited.

» Have you read this book? We'd like to know what you think about it - write a review about Mega Rex: A Tyrannosaurus Named Scotty book by Dr. W. Scott Persons and you'll earn 50c in Boomerang Bucks loyalty dollars (you must be a Boomerang Books Account Holder - it's free to sign up and there are great benefits!)


A Preview for this title is currently not available.
More Books By Dr. W. Scott Persons
View All