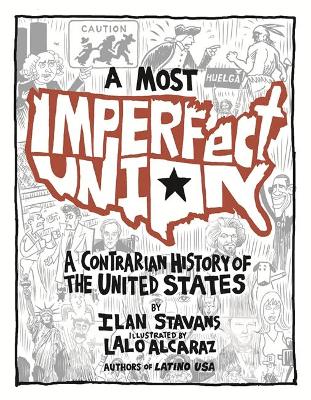 A Most Imperfect Union

A Contrarian History of the United States

Description - A Most Imperfect Union by Ilan Stavans

A New York Times Best SellerEnough with the dead white men! Forget what you learned in school! Ever since Columbus,who was probably a converted Jew, discovered" the New World, the powerful and privileged have usurped American history. The true story of the United States lies not with the founding fathers or robber barons, but with the country's most overlooked and marginalized peoples: the workers, immigrants, housewives, and slaves who built America from the ground up and made this country what it is today.In A Most Imperfect Union , cultural critic Ilan Stavans and award-winning cartoonist Lalo Alcaraz present a vibrant alternative history of America, giving full voice to the country's unsung but exceptional people. From African royals to accused witches, from Puerto Rican radicals to Arab immigrants, Stavans and Alcaraz use sardonic humour and irreverent illustrations to introduce some of the most fascinating characters in American history,and to recount travesties and triumphs that mainstream accounts all too often ignore. What emerges is a colourful group portrait of these United States, one that champions America's progress while also acknowledging its missteps.Sweeping and cinematic, stretching from the nation's prehistory to the post-9/11 era, A Most Imperfect Union is a joyous, outrageous celebration of the complex, sometimes unruly individuals and forces that have shaped our ever-changing land.

Book Reviews - A Most Imperfect Union by Ilan Stavans

» Have you read this book? We'd like to know what you think about it - write a review about Most Imperfect Union book by Ilan Stavans and you'll earn 50c in Boomerang Bucks loyalty dollars (you must be a Boomerang Books Account Holder - it's free to sign up and there are great benefits!)

Ilan Stavans is Lewis-Sebring Professor of Latin American and Latino Culture at Amherst College. He lives in Amherst, Massachusetts.Lalo Alcaraz is a faculty member at Otis College of Art & Design in Los Angeles, and the creator of the nationally syndicated comic strip, La Cucaracha." He lives in Whittier, California.