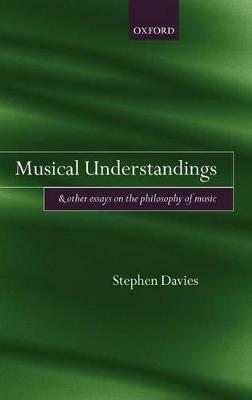 and Other Essays on the Philosophy of Music

Musical Understandings presents an engaging collection of essays on the philosophy of music, written by Stephen Davies--one of the most distinguished philosophers in the field. He explores a range of topics in the philosophy of music, including how music expresses emotion and what is distinctive to the listener's response to this expressiveness; the modes of perception and understanding that can be expected of skilled listeners, performers, analysts, and
composers and the various manners in which these understandings can be manifest; the manner in which musical works exist and their relation to their instances or performances; and musical profundity. As well as
reviewing the work of philosophers of music, a number of the chapters both draw on and critically reflect on current work by psychologists concerning music. The collection includes new material, a number of adapted articles which allow for a more comprehensive, unified treatment of the issues at stake, and work published in English for the first time.

» Have you read this book? We'd like to know what you think about it - write a review about Musical Understandings book by Stephen Davies and you'll earn 50c in Boomerang Bucks loyalty dollars (you must be a Boomerang Books Account Holder - it's free to sign up and there are great benefits!)

Stephen Davies teaches philosophy at the University of Auckland. He writes mainly about aesthetics and the philosophy of art, and has written extensively on the definition of art, the ontological character of artworks, cross-cultural aesthetics, the expression of emotion in art, and the interpretation and evaluation of art. His books include Musical Works and Performances (Clarendon, 2001), Themes in the Philosophy of Music (OUP, 2003), The Philosophy of Art (Blackwell, 2006), and Philosophical Perspectives on Art (OUP, 2007).

A Preview for this title is currently not available.
More Books By Stephen Davies
View All