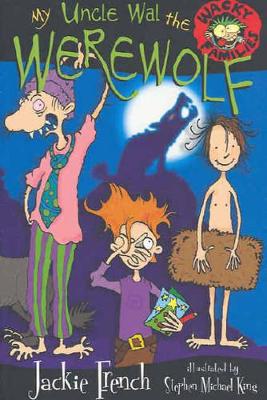 My Uncle Wal The Werewolf

Description - My Uncle Wal The Werewolf by Jackie French

BUStER LIVES IN tHE HAPPIESt WOLF CLAN AROUND. Dad can catch dried cow pats with his teeth, Mum's corgi milkshakes are to die for (unless you happen to be a corgi) and Aunty Paws mkes one of the best dead rat sandwich in the world. One day Mum and Dad disappear without a trace. Have Buster's parents been wolfnapped? And now, Uncle Wal is leader of the pack. He wants the clan to move from Werewolf Mountain, and for Buster to go to SCHOOL! But Buster has other plans... Find out what Buster discovers as this thrilling and hilarious adventure unfolds in the Wacky family series! Ages 7+

Book Reviews - My Uncle Wal The Werewolf by Jackie French

» Have you read this book? We'd like to know what you think about it - write a review about My Uncle Wal The Werewolf book by Jackie French and you'll earn 50c in Boomerang Bucks loyalty dollars (you must be a Boomerang Books Account Holder - it's free to sign up and there are great benefits!)

Jackie French AM is an award-winning writer, wombat negotiator and was the Australian Children's Laureate for 2014-2015 and the 2015 Senior Australian of the Year. In 2016 Jackie became a Member of the Order of Australia for her contribution to children's literature and her advocacy for youth literacy. She is regarded as one of Australia's most popular children's authors, and writes across all genres - from picture books, history, fantasy, ecology and sci-fi to her much loved historical fiction. 'Share a Story' was the primary philosophy behind Jackie's two-year term as Laureate. jackiefrench.com.au facebook.com/authorjackiefrench