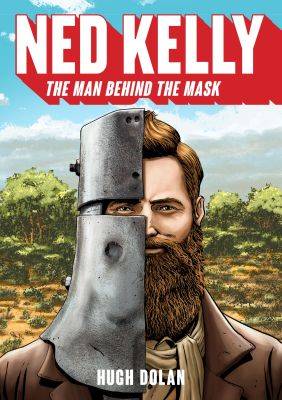 We all think we know the story of Ned Kelly, Australia's most famous outlaw, but we've never seen him in full colour like this before ...

Edward 'Ned' Kelly was born in 1855 into a poor Irish immigrant family in rural Victoria. He grew up loyal to his family, angry at the injustice he saw in Australian society and desperate to better his situation by any means. Often in trouble with the police, with the so-called Kelly Gang he was involved in horse and cattle stealing, bank robbing, kidnapping and ultimately murder. But he was the only bushranger to write a famous and compelling letter explaining his behaviour. As every Australian knows, after a legendary shoot-out Ned was captured by police and later hanged at Melbourne Gaol.

Folk hero or criminal, this is the story of Ned Kelly as you've never seen it before.

» Have you read this book? We'd like to know what you think about it - write a review about Ned Kelly book by Hugh Dolan and you'll earn 50c in Boomerang Bucks loyalty dollars (you must be a Boomerang Books Account Holder - it's free to sign up and there are great benefits!)

Hugh Dolan is a former intelligence officer with the RAAF. He is the creator of successful historical graphic novels and the author of 36 Days: The untold story behind the Gallipoli landings. His documentary film Gallipoli From Above screened on both The History Channel and ABC TV.