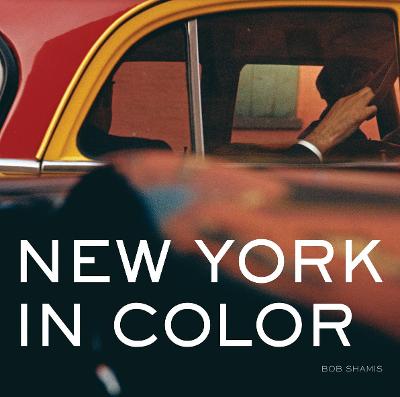 New York in Color presents the best color photography of New York over the last century. From its iconic landmarks like Times Square and Coney Island to the visual poetry of its streets and skyline, New York presents an ever-changing visual collage best seen in color. Here, neon lights define the spirit of the night, a young Bob Dylan lingers in the snows of Greenwich Village, subway trains are rolling murals, and New Yorkers of every era become dramatic actors on the world's greatest stage. Presenting work--much of it unknown--by major photographers, including such masters as Andre Kertesz, William Klein, Helen Levitt, and Joel Meyerowitz, New York in Color is destined to be a classic photographic survey of the world's most visually vibrant city.

Praise for New York in Color:
"Even in black-and-white, New York's colors come through. They do so more vividly in New York in Color, a stunning, color-only anthology." --New York Times
"Shamis . . . is to be praised not only for his selections but also for the fine sequencing--we see a picture of Coney Island circa 1902, for instance, right before another circa 1956--that adds to our appreciation of the individual images." --William Meyers, Wall Street Journal

"The two hundred images represent a visual conversation about New York, one that is inflected with everything from soft, pastel hues to jolting reds and yellows. There is grit and grace, lightness and laughter. And, yes, tragedy--a selection of images near the end is devoted to the World Trade Center." --New York Times Lens Blog

"A fantastic collection and the perfect gift book for anyone who loves the city or fine photography." --Connecticut Post

"There's no shortage of iconic black-and-white New York images. What you may be less familiar with, however, is the city's rich history of color photography. This history is the subject of curator Bob Shamis's stunning new coffee-table book, New York in Color, which is filled with some two hundred vibrant photos from the past hundred years." --PureWow.com

» Have you read this book? We'd like to know what you think about it - write a review about New York in Colour book by Bob Shamis and you'll earn 50c in Boomerang Bucks loyalty dollars (you must be a Boomerang Books Account Holder - it's free to sign up and there are great benefits!)

Bob Shamis is a consultant, independent curator, and photographer. As an independent curator he has organized photography exhibitions for galleries and museums, including the National Gallery of Canada. From 1998 to 2006 he was the Curator of Prints and Photographs at the Museum of the City of New York where he organized more than a dozen exhibitions. A fine art photographer, his work has been shown in one-person and group exhibitions in the United States and Europe is represented in the permanent collections of the Bibliotheque Nationale, Paris; the Brooklyn Museum; the Museum Ludwig, Cologne; the Museum of Fine Arts, Houston; and the San Francisco Museum of Modern Art.