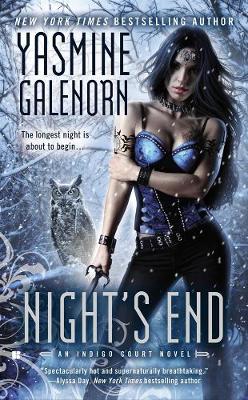 Centuries ago, vampires tried to turn the dark Fae in order to harness their magic, however their plan failed and they created a demonic enemy more powerful than they could have imagined. As the battle continues, in a final push, Myst returns with a vengeance to bring the Golden Wood forever under the rule of the Indigo Court. Newly crowned Fae Queens Cicely and Rhiannon have embraced their destinies and claimed their thrones. But Myst is rising once more, and now, at the helm of her armies, she begins her final assault on the Golden Wood.

» Have you read this book? We'd like to know what you think about it - write a review about Night's End book by Yasmine Galenorn and you'll earn 50c in Boomerang Bucks loyalty dollars (you must be a Boomerang Books Account Holder - it's free to sign up and there are great benefits!)

New York Times, Publishers Weekly, and USA Today bestselling author Yasmine Galenorn writes urban fantasy for Berkley: both the Otherworld Series and the Indigo Court Series, and will soon be writing a spinoff of Otherworld, called the Fly By Night Series. In the past, she wrote mysteries for Berkley Prime Crime, and nonfiction metaphysical books. She is the 2011 Career Achievement Award Winner in Urban Fantasy, given by RT Magazine. Yasmine has been in the Craft for 33+ years, is a shamanic witch, and describes her life as a blend of teacups and tattoos. She lives in Kirkland WA with her husband Samwise and their cats.

A Preview for this title is currently not available.
More Books By Yasmine Galenorn
View All