International favourites Ursula Dubosarsky and Andrew Joyner make the most of their advanced sense of the ridiculous in this hilarious read-aloud traditional tale.

Other Editions - One Little Goat by Ursula Dubosarsky 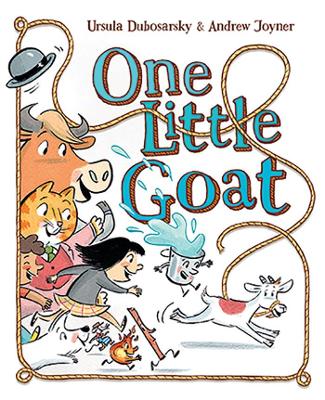 » Have you read this book? We'd like to know what you think about it - write a review about One Little Goat book by Ursula Dubosarsky and you'll earn 50c in Boomerang Bucks loyalty dollars (you must be a Boomerang Books Account Holder - it's free to sign up and there are great benefits!)

Ursula Dubosarsky wanted to be a writer from the age of six, and is now the author of over 40 books for children and young adults, which have won several national prizes, including the NSW, Victorian, South Australian and Queensland Premier's Literary Awards. Apart from fiction and picture books, she has also written the non-fiction "Word Spy" books about the English language. One Little Goat will be Ursula and Andrew's fourth book together. Their previous titles include The Terrible Plop, Too Many Elephants and Tim and Ed. Ursula Dubosarsky lives in Sydney with her family. Andrew Joyner is an Australian illustrator and cartoonist. In 2009 his first picture book was published, The Terrible Plop, written by Ursula Dubosarsky. The book has been shortlisted for many awards (including the CBCA Book of the Year 2010 and the PM's Literary Awards 2010), and has been made into an acclaimed play - Plop! - by South Australia's Windmill Theatre. In 2011, Andrew released his own series of books, All About Boris, a loveable and adventurous warthog. Along with his children's book work, Andrew illustrates regularly for newspapers and magazines, both locally and internationally, and in 2010 he illustrated Your Place or Mine? a cookbook by Gary Mehigan and George Calombaris of Masterchef. He lives in Strathalbyn, South Australia, with his family and nineteen pets.