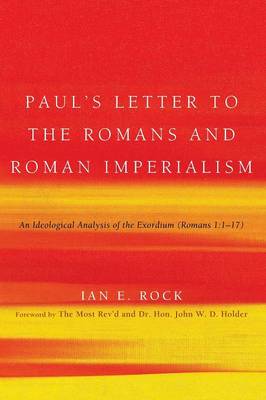 Paul's Letter to the Romans and Roman Imperialism

Description: This book seeks to demonstrate that the Letter to the Romans may be seen as an attempt by a subordinate group to redress actual and potential issues of confrontation with the Empire, and to offer hope, even in the crisis of facing death. Paul demonstrates that it is God's peace and not Rome's peace that is important; that loyalty to the exalted Jesus as Lord and to the kingdom of God--not Jupiter and Rome--leads to salvation; that grace flows from Jesus as Christ and Lord and not from the benefactions of the Emperor. If the resurrection of Jesus--the crucified criminal of the Roman Empire--demonstrates God's power over the universe and death, the very instrument of Roman control, then the Christ-believer is encouraged to face suffering and death in the hope of salvation through this power. Paul's theology emerges from and is inextricably bound to the politics of his day, the Scriptures of his people, and to the critical fact that the God who is one and Lord of all is still in charge of the world. Endorsements: ""A model of what exegesis must be in a global, postmodern world. Ian Rock's remarkable study of Romans 1:1-17 (and 9-11) makes explicit (1) its analytical/textual frame (a rigorous historical critical/political and rhetorical exegesis), (2) its contextual frame (Rock's experience of the interaction of imperialism and religion in the Caribbeans and in Rome), and (3) its hermeneutical/ideological frame (striking theological insights in Paul's letter)."" --Dr. Daniel Patte Professor of Religious Studies, New Testament and Early Christianity, Vanderbilt University Co-editor of the series Romans through History and Cultures Editor of The Cambridge Dictionary of Christianity (2010) ""This book enables us to listen to Paul again as he speaks in Romans. Just when we thought we had heard all that St. Paul had to say, Dr. Rock invites us to listen again. When we do so, we hear some new things that, like the old ones, can lead us to a deeper understanding of Paul, and, even more so, a better understanding of the integrity of the faith in the context of a powerful and domineering imperialistic ideology. The book is excellent reading for Pauline scholars in particular and biblical scholars in general."" --Rt. Revd. Dr. and Hon. John W. D. Holder Bishop of Barbados ""By means of an ideological analysis of the exordium (Rom 1:1-17), Ian Rock demonstrates that the issues between Jew and Gentile arising from the arrival of the Christ-movement in first-century Rome concerned more than intercommunal conflicts. Rock depicts the Roman context as an arena of competing and conflicting ideologies--that of Roman imperialism and the Augustan peace based on Virgil's Aeneid, in contrast and opposition to the justice and mercy of the God of Israel, whose son Jesus Christ was vindicated by his resurrection. . . . Rock offers a challenging reinterpretation of Romans that combines careful exegesis, theological and ideological competence, and a concern for context aided by his own Caribbean insights--an excellent study that uses a close analysis of the exordium to support the unity and integrity of the letter."" --Dr. William S. Campbell Reader in Biblical Studies in the School of Theology, Religious Studies and Islamic Studies, University of Wales, Trinity Saint David ""This is a stimulating in-depth analysis of the opening passage of Romans that triggers a wave of insights into the whole letter. Its hermeneutical rigor in the conscious location of thought both in the twenty-first-century Caribbean world as well as in the first-century Roman-dominated world offers a political reading of Romans that will lead to important further discussion in the academy and beyond."" --Dr. Kathy Ehrensperger Reader in New Testament Studies in the School of Theology, Religious Studies and Islamic Studies, University of Wales, Trinity Saint David About the Contributor(s): The Rev. Dr. Ian E. Rock is the Principal of Codrington College, the Seminary 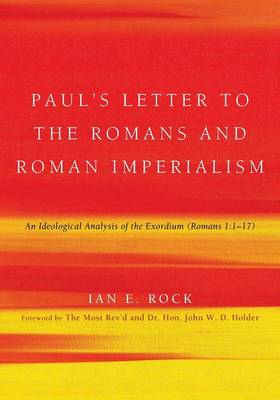 » Have you read this book? We'd like to know what you think about it - write a review about Paul's Letter to the Romans and Roman Imperialism book by Ian E Rock and you'll earn 50c in Boomerang Bucks loyalty dollars (you must be a Boomerang Books Account Holder - it's free to sign up and there are great benefits!)


A Preview for this title is currently not available.
More Books By Ian E Rock
View All