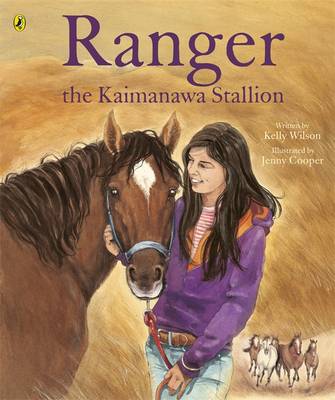 Kelly Wilson's heartwarming picture book about a stallion rescued from the 2012 Kaimanawa muster, and his real-life journey from wild horse to show horse, illustrated by Jenny Cooper

Ranger is a wild horse living in the rolling Kaimanawa Ranges of New Zealand. The lead stallion of a large herd, he protects his mares and foals from danger and takes them to safe places to graze among the tussock.

One wintery day, Ranger hears the sound of a helicopter approaching. The Kaimanawa horses don't trust humans and Ranger has always kept his herd well away from them. He rounds up the others to flee, but after hours of being mustered by helicopter, he finds himself locked in a pen with over a hundred frightened horses.

This will be his very last day in the wild.

But it's also the first day of a completely new life - a life that Ranger at first finds frightening and confusing. But, with the gentle and patient care of the three sisters who have rescued him, it's a life that Ranger will eventually grow to love.

» Have you read this book? We'd like to know what you think about it - write a review about Ranger the Kaimanawa Stallion book by Kelly Wilson and you'll earn 50c in Boomerang Bucks loyalty dollars (you must be a Boomerang Books Account Holder - it's free to sign up and there are great benefits!)

Kelly Wilson is a sought-after designer and equestrian photographer and now the author of three biographical books about her and her sisters' work with horses- For the Love of Horses (2014), Stallion Challenges (2015) and Mustang Ride (2016). Ranger is Kelly's first children's picture book. She and her sisters Vicki and Amanda are well known and popular show-jumping riders and with their family business Showtym Sport Horses are also nationally recognised horse trainers/whisperers. Kelly and her sisters live in Hukerenui, north of Whangarei. Jenny Cooper has illustrated countless children's picture books and has won a number of awards. She is a master of beautiful watercolour settings and lively characterisation. Her most recent bestselling Penguin Random House titles are A Treasury of NZ Poems for Children edited by Paula Green (2014) and Gladys Goes to War written by Glyn Harper (2016). As a child, Jenny taught herself to illustrate by drawing horses and is a self-professed horsey-girl.

A Preview for this title is currently not available.
More Books By Kelly Wilson
View All