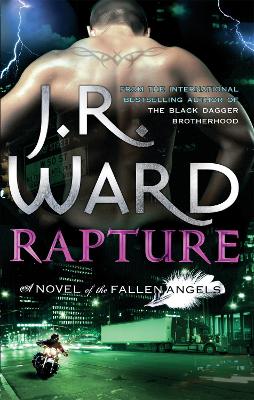 Mels Carmichael, reporter for the Caldwell Courier Journal, gets the shock of her life when a man stumbles in front of her car outside the local cemetery. After the accident, his amnesia is just the kind of mystery she likes to solve, but she soon discovers they're over their heads with his past. Over their heads with passion, too. . .As shadows walk the line between reality and another realm, and her lover's memory begins to come back, the two of them learn that nothing is truly dead and buried. Especially when you're trapped in a no-holds-barred war between angels and demons. With a soul on the line, and Mels's heart at risk, what in heaven - or in hell - will it take to save them both? 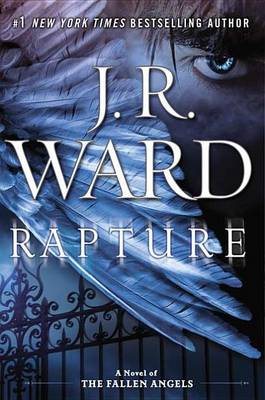 » Have you read this book? We'd like to know what you think about it - write a review about Rapture book by J. R. Ward and you'll earn 50c in Boomerang Bucks loyalty dollars (you must be a Boomerang Books Account Holder - it's free to sign up and there are great benefits!)

Rapture is the fourth book in the Fallen Angels series by American author, J.R.Ward. With the score between the evil Devina and the saviour Jim Heron now two souls to one in Jim’s favour, the Maker decides to punish Devina for cheating by plucking Jim’s XOps boss, Matthias from Hell for a second go round. When Matthias steps in front of Caldwell Courier Journal columnist, Mels Carmichael’s car outside the Pine Grove Cemetery, she is strangely attracted to this dangerous-looking man with amnesia, whether or not there is a story in it. And the attraction may be mutual, but Matthias knows he is back in the land of the living for a reason, and that being in his company cannot end well for Mels. Devina is confident she can again win the soul of this conscienceless, power-hungry, despotic sociopath but is intent on distracting Jim from his task using tricks with hair dye and mutilated corpses. With Eddie out of action, Jim is a man down, but after faltering initially, Adrian proves to be a selfless warrior. This instalment has quite a few killings and attempts as victims encounter guns, knives and drowning; there are some fairly hot sex scenes; three XOps assassins are drawn to Caldwell; crime scene photos secretly snapped with mobile phones; explosive information passed on via a flashdrive; a bullet casing becomes integral to the story; and there is a cute twist at the end that involves Dog. As usual, fans of Ward’s BDB series will note mentions and cameos of characters from that series. The characters are engaging, the plot imaginative and the dialogue has its own special charm. Readers will eagerly await the next book in the addictive series, Possession.